This past weekend I made a brief escapade to the Big Apple for the American Teilhard Association Annual meeting featuring guest speaker, Ilia Delio. 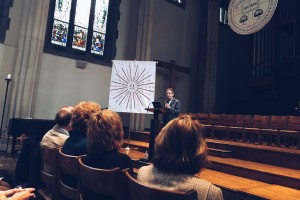 The brief trip was as crammed with experiences as Manhattan is crammed with people and Pentecost Sunday wound up being an unexpected culmination of the three days.

As many of you know, Pentecost is the celebration in the liturgical Christian calendar of the arrival of the Holy Spirit 10 days after the ascension of Jesus and celebrates the “birthday” of the church. According to the gospels, the Holy Spirit came down in forms of tongues of fire that rested above each of the disciples, and in turn gave them the capacity to speak in different “tongues”. People who heard them started gathering and as they heard all these languages being spoken it created a lot of confusion (like it would), and some even chalked up these “fiery fluent crazies” as being drunk (a most rational conclusion.) The traditional phrase that you’ll often hear on Pentecost is “Veni Sancte Spiritus” which translates as “Come Holy Spirit,” an ancient invocation of the “Bring it on” variety.

While I have been following the liturgical calendar a bit more closely this year, I wasn’t thinking particularly about the unique correlation between this special day and the American Teilhard Association gathering. During the question and answer time following Ilia Delio’s address, however, someone raised the question about why young people don’t seem interested in the church, and what that might mean evolutionarily for the future of world religions. Ilia gave a response in which she criticized (as Teilhard did) the outdated theology and doctrine that is simply becoming incompatible with the future generations of humanity. 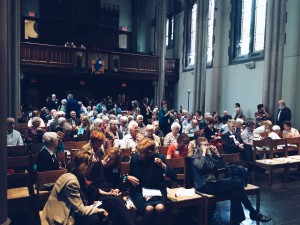 Mary Evelyn Tucker (a board member of the ATA and one of the hosts of the event) jumped in to add that this is why she, Mary Evelyn believed it was important to just “take the God language out” in projects such as her “The Journey of the Universe” project to make it more appealing to younger generations.

While I do agree that “God language” is often off putting to those of us who might be in the “spiritual not religious” camp, I have to disagree that the answer is to simply take “God language” out of the equation. Omission is not evolution, and while many among us are atheists, there are also many who as Teilhard describes might be more aptly called “unsatisfied theists”:

We are surrounded by a certain sort of pessimists who continually tell us that our world is foundering in atheism. But should we not rather say that what it is suffering from is unsatisfied theism?…are you quite sure that what they are rejecting is not simply the image of a God who is too insignificant to nourish in us this concern to survive and super-live to which the need to worship may ultimately be reduced?[i]

Rather than throwing out “God” with the dirty bathwater of what no longer serves humanity in religion, it is our task to transcend and evolve the language of a “God who is too insignificant for us to worship.” Our ideas must expand and deepen in order touch upon the mystical heart that so enraptured and informed Teilhard,: the fiery center of the universe he called the heart of God, the beating personal center of all traditions and whose fabric we shape with our very lives.

I happen to think that many of us in the Millennial cohort believe in God, just not of the white-bearded-up-in-the-sky variety. What we are leaving behind is tribal exclusionary religion and instead intuiting our way forward into a faith that believes whomever God is, God has to be the dynamism and sum of all relationships in this great system in the process of evolution. Whomever God is, God has to be intimately and inextricably shinning through every facet of this incredible material world. And whatever that faith is, it has to include everyone, everywhere, and must offer us solutions of the salvation of the planet NOW, not later.

Some scholars describe this as the birth of Second Axial age religion, and unsurprisingly, this new vision and language of God is spreading like wildfire and is creating a lot of confusion for those that prefer the older language of God.

Now where have we heard that before?

Welcome to the Planetary Pentecost and the birth of a church as big as the cosmos itself.

Veni Sancte Espiritus.  Bring it on. 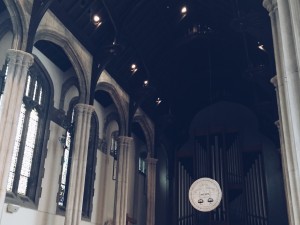