(This post is a continuation of “The Planetary Pentecost – Part 2”

We’ve been exploring the idea that we are in the midst of a Planetary Pentecost: the arrival of a new church that is as big as the cosmos. We’ve also been challenging the perception that rising generations lack an interest in God, but may instead be (as Teilhard describes) “unsatisfied theists.” Humanity, it seems, is ready for a larger, more inclusive, and dynamic language of God. 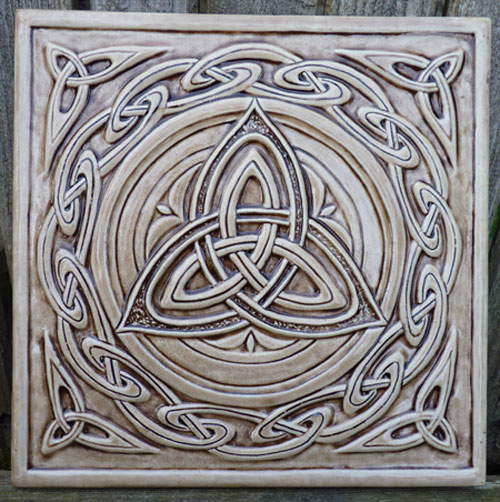 The fact that this past Sunday was Trinity Sunday illustrates an apt progression in our Teilhardian explorations of a Planetary Pentecost: the Trinity, representing Divinity as a dynamic and creative interdependent community, points us in the direction of how we might begin thinking of world religions in this dawn of the Second Axial age.

If the language of God doesn’t need to be thrown out, but instead evolved, what role – if any – does religion have as we continue toward unification in this Planetary Pentecost? Do we ditch existing religious paths and form a new, global trans-religious amalgam? Or are we being invited into a deeper understanding of the unique role of each spiritual tradition?

This was precisely the topic of Ilia Delio’s talk at the American Teilhard Association gathering: Teilhard de Chardin and World Religions: Ultra Catholic or Ultra Human? In her talk, Delio addressed the questions: Did Teihard have Christian bias?

Did he insist that other religions needed to be Christianized in order to have a role in evolution?

Delio maintained that Teilhard approached world religions primarily as a scientist, interested in the evolutionary role of religions. Teilhard believed that the evolutionary role of religion is to animate the “zest” for life. To that end, Teilhard insisted that we have a critical role to play: we need to be observant of where doctrine and theology have become stuck in outmoded cosmologies and are no longer energizing humanity toward a deeper union with God and with each other.

In other words, we’re being asked – by Teilhard, and perhaps, the Spirit of evolutionary growth herself – not to divest ourselves of the traditions. We’re not being asked to pour all our unique religious colors into one bucket resulting in the murky pigment of the “baby blow-out” variety (if you’re a parent you know the particular glory of this hue). Instead, I believe we are being asked to maintain the essential pigment of each tradition, but bring them all into a greater cohesive wholeness, like that of a vibrant stained glass window. 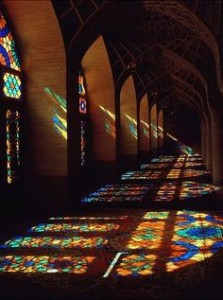 I would venture to say that each spiritual tradition carries an indispensable “color,” an irreplaceable essence that is integral to the greater whole. Likewise, we could view this transition into the Second Axial Age of religion as the movement out of the individual dye boxes of the traditions, and into the skilled hands of the artist who will sand off rough edges and place us in the same planetary frame, so that we can exist as a collaborative, interdependent whole: forming one vibrant, illuminating vision of God together.

In other words, the key to transcending the cliquishness, strife, and violence that has characterized the worst of humanity’s religious impulse is surrender: It’s the praxis of confidence and humility that says we can be faithful stewards of our revelation while gratefully joining hands with others in theirs.

But imagine, instead, that in the formation of the stained glass masterpiece, the red pieces of glass said “Sorry, our dye requirements insist we remain in our red box forever! We don’t believe in being taken out of our box and certainly don’t believe in working alongside yellow and blue.”

This is where I think we find ourselves in Christian theology; we must introduce dynamism back into our understanding of God to keep us from being stuck in the box.

Did Teilhard have a Christian bias? Undoubtedly!

Could Teilhard have had a more immersive understanding of other religious traditions? Of course!

But he would have had to exist in our time, or had a radically different life, and therefore ceased being Teilhard. Let’s not forget that Teilhard was – gasp! – human, and that all of us are limited by our humanity and the constructs of our particular space/time configuration.

Teilhard worked from within Christianity because this was his tradition.

Enraptured with a mystical understanding of Christ-as-evolver, Teilhard leveled his theological critiques at the church and did so from a scientific lens with eye toward the trajectory of evolution. Teilhard’s heart was able to perceive beyond duality, and intuited the whole image that was wanting to emerge in our consciousness.

If we want to remain faithful to Christianity’s heart and message, we too must begin the sacred labor of setting loose those aspects of the tradition that are simply incompatible with our revealed cosmos. We must be stewards of the evolutionary responsibility that philosopher Ken Wilber describes as transcending and including.

After all, we really only find the depth dimension from within a tradition, not outside it, where we often wind up reinventing the wheel poorly. Kind of like digging to create an artificial pond on a beach so you can swim in water that is “cleaner”: eventually you realize that evolution has been at this a bit longer, so you toss your shovel and plunge into the ocean.

It is up to us to locate and evolve the doctrines in our Christian tradition that continue to create an “intellectual and emotional straight-jacket”[i] within which the creative force of an evolving humanity refuses to be restrained. It is imperative that, as socially responsible, intelligent followers of Christ we ask with Teilhard, “What form must our Christology take if it is to remain itself in a new world?”[ii] What Teilhard meant by this is not that we must be slaves to each new trend, thus trading chains to orthodoxy to the whims of capriciousness, but rather that we must always use evolution itself as the yardstick by which to measure how we define orthodoxy. As Teilhard says, “Nothing can any longer find place in our constructions which does not first satisfy the conditions of a universe in process of transformation.”[iii]

What Teilhard invites us to is into a non-dual dynamic understanding of this next age of religion: one in which we do not simply get together from time to time to show how tolerant we are of one another. Neither are we being asked to dilute the unique gifts of each tradition by giving up on religion, or combining them into an undifferentiated amalgam. We are being invited into an era of understanding our traditions as forming a symbiotic ecosystem, recognizing that our futures are interdependent in forming a new and vibrant whole:

Together we must deepen human consciousness and collaborate to create lasting solutions to the social and ecological crisis of our times.

“Old men ought to be explorers
Here and there does not matter
We must be still and still moving
Into another intensity
For a further union, a deeper communion.”

Or as Teilhard would describe it, true union differentiates. The more we enter into an era of religious communion and collaboration, the more the essential pigment of each of our traditions will be distilled, highlighted, and become useful to the evolution of our human family.

Is this the Planetary Pentecost? I believe so. Just as in the early church, the winds of change are afoot, and just like the biblical account, the “birth” of this new church makes us all midwives: we must each seek out how we are being asked to mediate this change in our lives, and as participants in the whole system.

We must be still enough to recognize the wisdom alive in our traditions, and “still moving” in the humility that recognizes the work ahead of refining, clarifying and polishing each unique gift in our lineages. Only then, as we move from the millennia of dye-taking and into our new window “setting,” can we move into another “intensity” and become something entirely new together: a riot of brilliant colors illuminated by the fiery heart of God. 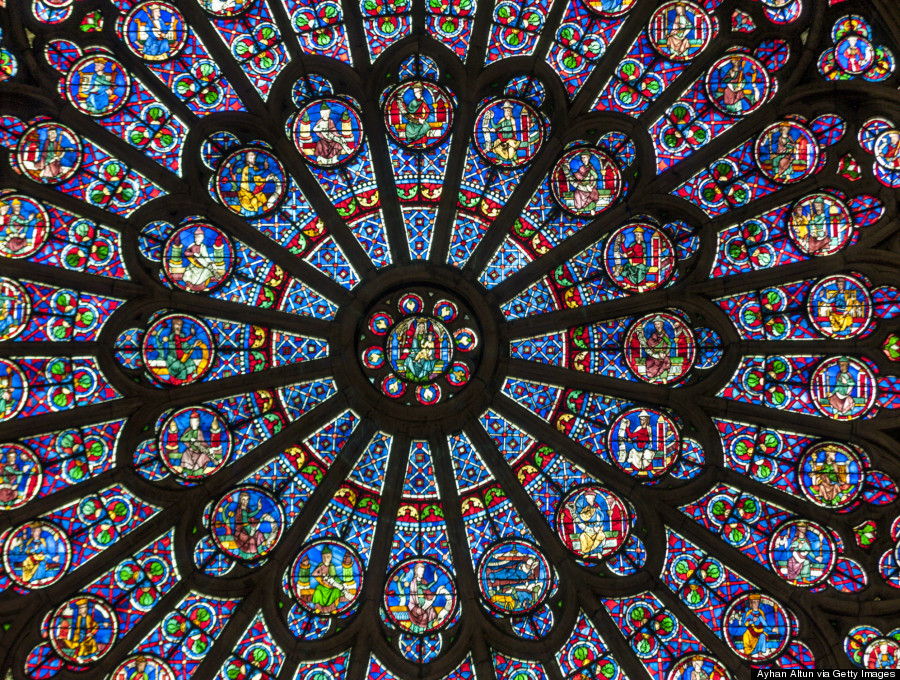