(This post is a continuation of “The Planetary Pentecost – Part 1”

Being the good Teilhard-geek that I am, and since I found myself near Teilhard’s NYC stomping grounds this past weekend, I figured it would be a momentous experience for me to celebrate communion and Pentecost at one of the churches where he was in residence, St. Ignatius of Loyola on Park Avenue. 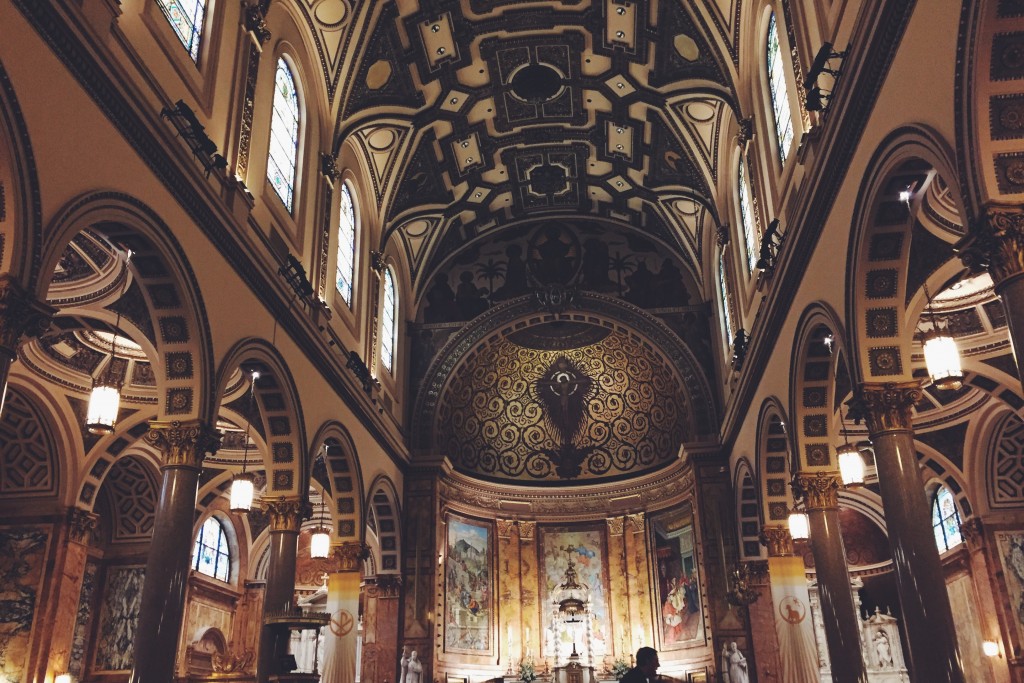 The church building did not disappoint, and housed a clearly seasoned choir taking on some stunning Gregorian chant to boot. I geared myself up for what I expected would be a totally Teilhardian Pentecost celebration.

But that day the NY weather had dropped 20 degrees, and it was cold in that building. Even when the pews filled up more, I still found myself shivering a bit. The priest’s homily was on how Pentecost was the continuation of God’s “sticking it out with us”: “God didn’t give up on the disciples, and God isn’t giving up on us yet.”

The idea brought to mind a parent who is still buying their “goth” daughter preppy clothes with the hope that she’ll come around and remove her piercings and die her hair back to blonde. The country club hasn’t given up on you yet, dear! Or a boyfriend who is sticking to his relationship even though his heart has gone out of it, still going through the motions as though his not leaving is the same thing as deep intimacy. He brings her flowers and a card that reads “don’t worry, I’ve resigned myself to sticking it out with you.”

Shortly after faking being catholic enough to take communion, (which included a nearly empty chalice resulting in a rather difficult time swallowing the wafer) the service concluded. As beautiful as the music and building were, as I walked down the steps of the church I felt somewhat a sense of relief and glad to be back in the fresh air, cold as it was. Teilhard may have once been in residence at St.Ignatius, but his essence was clearly not hanging around inside those marbled walls.

I decided to cut through Central Park, figuring that Teilhard might have also once taken these very paths, wrapping my jean jacket tightly around me and bracing myself against the wind. I wondered what it would be like to walk alongside Teilhard and talk to him about all the thoughts that were swirling around inside me as I walked: the millennial search for language of a God we can believe in, the sad and rather depressing homily, and how I was still trying to swallow bits of that stubborn wafer down…when suddenly I heard sirens up ahead.

From a distance I also started to make out the sounds of chanted phrases, music, and the sound of people—LOTS AND LOTS of people. Finally, as I rounded the bend I saw them in the distance: it was the hundreds and hundreds of New Yorkers walking in the AIDS Walk.

The closer I got the louder the roar of human voices became, like the thunderous sound of a waterfall. I picked out English, Spanish, French and possibly Mandarin—and those were just the voices that happened to be walking by me. I saw different ages, ethnicities, races and genders: people singing, laughing, chanting, and talking. Some quietly holding pictures of loved ones lost from AIDS, and some who were celebrating their departed loved one’s lives by dancing their way through the street, and likely some whose lives may not have been directly affected by AIDS but were walking in solidarity all the same. 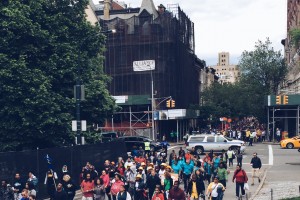 Memories wafted in of my own Spanish “uncles” who died of AIDS, and how my parents insisted on bringing us to the hospitals to be with them, defying the hospitals which in that time prohibited children from visiting AIDS patients. I remembered being little enough of to be carried on the shoulders of another “uncle” through an AIDS walk in Madrid, and how just a few short years later he too lost his fight with the disease.

I had no idea that there was an AIDS walk that day, but the poignancy of it being held on Pentecost was not lost on me. There may not have been literal tongues of fire above the folks that were in the procession before me, but I promise you, I got swept up in the warmth and light that was cascading off them.

This is the Pentecost that is spreading across the planet: people gathered outside church buildings together in solidarity and action, in remembrance and a shared commitment toward a more loving present and a better future. Men and women, gay, straight, queer, transgender, rich or poor, legal immigrants or not… the vibrancy and beauty of the Divine heart seemed to shine diaphanously through every face, every unique-ness, every “difference”, forming a vibrant whole out of all of the many parts.

We need language for the God that is big enough for this church, I thought to myself.

And then, as if he was standing directly behind me, Teilhard’s words came suddenly rushing through me with the heat of a fiery wind, making my heart burn within me:

“…let there be revealed to us the possibility of believing at the same time and wholly in God and the World, the one through the other; let this belief burst forth, as it is ineluctably in process of doing under the pressure of these seemingly opposed forces, and then, we may be sure of it, a great flame will illumine all things: for a Faith will have been born (or reborn) containing and embracing all others—and, inevitably, it is the strongest Faith which sooner or later must possess the Earth.” [i]

“Veni Sancte Espiritus,” I said quietly in response to Teilhard and the happy crowd before me.

To read more of Brie’s millennial perspective on Teilhard, check out her blog www.becomingultrahuman.com.