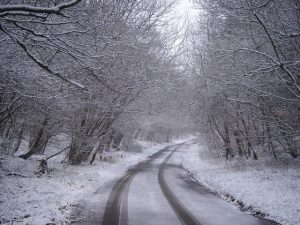 I watched them disappear this morning into the snowstorm, making their way home through the Maine winter after an extraordinary weekend of prayer, tears-and-laughter, teaching, stories, and conversation. My tiny, plucky ‘conscious circle…how it tugged at my heart to see them go.

I had called them all together, impromptu, about a month ago: a baker’s dozen of the most experienced and steady folks in the Wisdom network, to join me for a weekend here in Stonington (in February, utter madness!) to see if we could collectively begin to discern what the cosmos seems to be up to in the wake of that traumatic election upheaval and what Wisdom might expect of us in response.

The conversation around this topic has of course been flowing nonstop on the social media since well before November 8, but so much of it has been at the horizontal level, driven by historical and political analysis—and of course, from the perspective of the now duly-chastened secular intelligentsia. Shock, trauma, disorientation, and/or denial have been the dominant modes in the circles I mostly travel in, a still-dumbfounded inability to fathom what happened and why.

In times such as these, it is a traditional practice in the Wisdom tradition to convene a small gathering of Wisdom “elders” to assess the situation from a deeper spiritual perspective, and to re-establish contact—through prayer, spiritual practice, sohbet (spiritual conversation), and sincerity of heart—with what Gurdjieff calls “the conscious circle of humanity:” that broader bandwidth of guiding presence always encircling our globe in its compassionate embrace and helping keep the course steady even in the midst of these periodic cavitations. The invitation—in fact, the imperative—to connect with this source of assistance is strongly underscored in Wisdom teaching, and it seemed to me that it was the one stream of input not being heard in our present anguished state of national soul-searching. 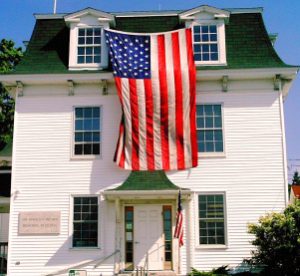 And so our small cohort of conscious circle postulants convened at the Stonington Town Hall on February 3, having arrived from all over the country. We deliberately chose to meet there, both because of the obvious civic tie-in (yep, the red, white, and blue voting booths still line the east wall), and because the light there happens to be beautiful, streaming in right off the ocean through glorious, ten-foot-high windows. Thanks to the generous underwriting of the Northeast Wisdom, we were able to partially subsidize the costs of everyone’s lodging and meals, but the response to my invitation offered by our thirteen participants was an instantaneous “Yes,” long before any funding was secured. It was that pure spirit of “Hineni”—“Here I am, Lord”—that really launched us into orbit and was both the modus operandi of our being together and ultimately the marching orders received.

The first two days were devoted mostly to teaching, as we collectively explored some of the major resources at our disposal for reframing and enlarging perspective. We reviewed the resources in Teilhard’s evolutionary vision, particularly the reassurance that deep hope flows over deep time, and that the evolutionary imperative toward the higher collectivity (the next level of “complexity consciousness” manifest as the one body of humanity) was still flowing serenely and strong. We then explored Gurdjieff’s Five Obligolnian Strivings (which I’ll be offering more widely in a Spirituality and Practice e-course upcoming this lent see link) and in particular, his conviction that there is a certain cosmic expectation laid upon the human species as part of its participation in a dynamic cosmic web of “reciprocal feeding.” Our human contribution is made in the form of the higher energies of compassion and clarity yielded as we submit ourselves to the practices of “conscious labor and intentional suffering.” The fruits of this transformed being- energy are qualities such as peace, love, joy, forbearance, patience, compassion—traditionally known in Christian language as “the fruits of the spirit.” What makes Gurdjieff’s take interesting is that they are not only “qualities” but actual energetic substances needed for the feeding and building up of our common planetary (and interplanetary) life. When we fail to produce these qualities—or worse, produce the opposite, the false fruits of entitlement, greed, deceit, violence, and fear—then the whole cosmic equilibrium is thrown out of whack.

We took an extended pass through the Ken Wilber “Trump and a Post-Truth Era” article and found both the perspective (the evolution of consciousness) and the general analysis helpful. His ability to zero in on the progressive dysfunctionality of the “green” or pluralistic level of consciousness, the leading edge of social conscience and evolutionary change, as it found itself caught in a cul de sac of “aperspectival madness, hit home for many of us and offered valuable cues as to how to begin to work with the circumstances now before us.

On Monday afternoon the conversation started to flow, as we broke into triads and then reunited for deep, searing, imaginative, and energy-filled exchanges. While it would be premature to say that any “charter of action” emerged from our deliberations, a remarkable consensus emerged that whatever the long-term political outcome may be, the instructions remain the same: to hold the post, stand with courage and equanimity, and be able to hold a resilient space for third force, staying close to that “light within” that is already shining brightly in the midst of this tunnel, not just awaiting us at the end of it.

Part of the empowerment of the whole gathering was to be able to hold those “unimaginable” conversations, standing lucidly as we stared right into the face of that nameless, paralyzing dread that has so much of our nation in its grip and discussed with strength and lucidity scenarios such as the collapse of democracy, global conflagration, and the means of self-protection when operating in the presence of unleashed forces of evil.

The greatest reassurance—and I admit, surprise—came for me in our times of spiritual practice and in a Sunday morning Eucharist which palpably exploded with the presence of the risen Christ. (In fact, it detonated so powerfully that the explosion was picked up all the way in British Columbia by one of our Wisdom circle there, who emailed me “What just happened?”) It was an unmistakable confirmation and teaching from that very conscious circle to which we had humbly presented ourselves for guidance.

While the courses of action that emerge from each one of us may differ, what was eminently clear to each of us was that this protective field of tenderness and responsive concern to our planetary anguish is alive and well, and that we can and MUST turn to it…daily, hourly, with every best. In best of Wisdom fashion, our hope shifted away from outcome and back to source.

Others in the circle will no doubt offer their own takes, on the Wisdom Community Facebook page and in blogs of their own. And of course, the real reverberations of the work we did this past weekend will reveal themselves only gradually, as they percolate out through the “circles within circles” in our Wisdom network both by direct transmission and through quantum entanglement. But for me, the heart of what we were about this weekend and where we got to spiritually hovered closely within the words of the haunting melody that Laura Ruth sang for us on our final night:

Though my soul may set in darkness.

It will rise in perfect light.

For I’ve loved the stars too fondly

To be fearful of the night.

Thank you, one and all, who made this gathering possible I am more than ever convinced that wherever our times have landed us and whatever may be in store, this is Wisdom’s finest hour.

Meanwhile, I invite you all to ponder collectively these powerful words from Connie Fitzgerald, from her paper FROM IMPASSE TO PROPHETIC HOPE, delivered in 2009 before the Catholic Theological Society of America. I believe it frames the window of opportunity for all of us, while not mincing words on the challenge:

Any hope for a new consciousness and a self-forfeiture drawn by love stands opposed by a harsh reality. We humans serve our own interests, we hoard resources, we ravage the earth and other species, we scapegoat, we make war, we kill, we torture, we turn a blind eye to the desperation and needs of others, and we allow others to die. Our ability to embody our communion with every human person on the earth and our unassailable connectedness with everything living is limited because we have not yet become these symbiotic “selves.” We continue to privilege our personal autonomy and are unable to make the transition from radical individualism to a genuine synergistic community even though we know intellectually we are inseparably and physically connected to every living being in the universe. Yet the future of the entire earth community is riding on whether we can find a way beyond the limits of our present evolutionary trajectory. (37-38) 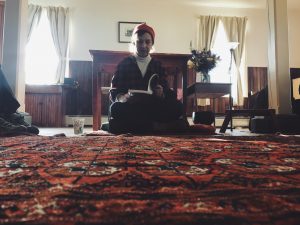