“We intend to celebrate the Eucharist continually in our lives as well as in the liturgy, to offer ourselves in all that we do or suffer to God…”

— from The Rivendell Rule

Two years ago I found myself in British Colombia in November, there to lead a retreat for The Contemplative Society. On the way to the retreat center, my host asked, “Would you like to see the salmon spawning?” As it turned out, we would be passing by a river where the salmon run was active, and the spawning season was almost over.

I had seen images of these fish making their annual swim upstream from the ocean, journeying back to the place of their birth to lay their eggs. And, to be honest, I wasn’t all that interested in seeing them in person—but I figured, “Why not?”—it was on the way. I had no idea how powerful the encounter would be.

As we approached the river, the few remaining salmon still making the journey—throwing themselves against the current as they worked their way upstream—looked utterly exhausted, like it was taking every tired fiber of their being to continue onward. A few were finally settling into a spot to lay their eggs. Some were clearly dying. And scattered all along the riverbanks—corpses. Hundreds and hundreds of salmon corpses. 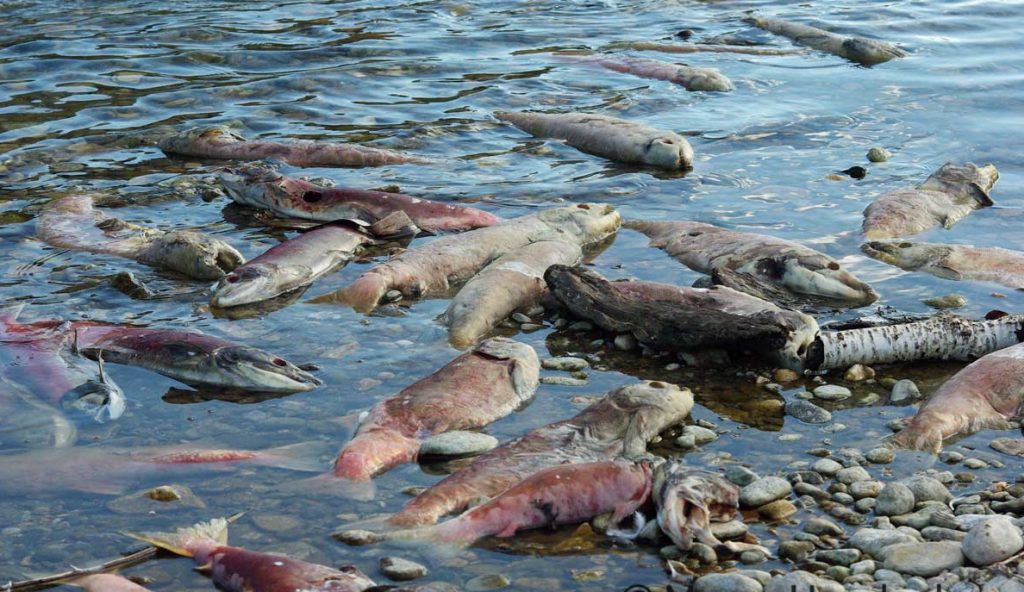 The air reeked of dead salmon, and all around wings were flapping as gulls tore flesh from their carcasses and plucked out their eyes. And to my surprise, with a fierceness and a tenderness that seemed exhausted and inexhaustible, I heard the whole scene before me speak Christ’s words at the Last Supper, “This is my Body, given for you.” I was dumbfounded. 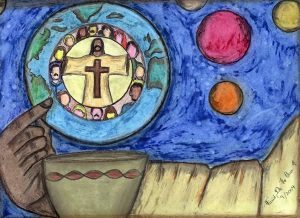 I was standing smack-dab in the middle of a living icon of the Eucharistic universe. “Jesus our Mother,” as Julian of Norwich called him (and who knows this kind of self-giving better than a mother?)—Christ our tired and exhausted mother and brother and lover and friend—speaking through every facet of the whole, long, painful and messy unfolding of creation, “This is my Body, given, and given, and given for you.” Brutal and beautiful and broken and whole—a circle-dance of sacrifice, without which life would simply cease to be.

With striking clarity, I saw how the meal Jesus gave us sums up what the Heart of Life is always saying, always doing, and always calling us to: “Do this to remember me”—to make me present, to continue unfolding my love. “This is my Body given… This is my Blood poured out… Do this… Do this…” Give yourself, pour yourself out, in love, in surrender, in service to the unfolding of something so much bigger than any one of us, but to which each of us is nevertheless utterly integral—the ongoing self-disclosure of the Heart of God.

In a recent post at my personal blog, I shared about the powerful impact Sufi chanting and dance has made on my spiritual life. For the longest time, there’s been an intuitive linking in my mind of this practice with Eucharist. The Arabic word for this ceremony—zikr—means “remembrance”—the same word used by Jesus in the institution of the Eucharist—”do this in remembrance of me.” And significantly, remembrance in the biblical languages (zakar in Hebrew, anamnesis in Greek) doesn’t imply simply calling to mind a thing from the past, but making such a thing (a person, an event) present in the here and now.

In the Jewish Passover liturgy, it’s said, “What makes this night [not that night!] different from all other nights?” The mighty acts of God are present here and now. “Do this to re-member me, to make me truly present”—and to make yourself truly present as well.

This linking of zikr and Eucharist, the great Christian and Sufi sacraments of remembrance, was cinched for me when I stumbled across a scene in the second-century Christian text The Acts of John. In the canonical Gospels, we’re told that after sharing the Last Supper, Jesus and the disciples “sang a hymn” (Matt. 26:30), but no further details are given.

In The Acts of John, the scene is completed. Having shared the meal, Jesus asks the disciples to form a circle around him, holding hands. He then sets the circle in motion, initiating a dance, and bids them call out Amen in response as he sings from the circle’s center. The lines of his song emphasize the reciprocity and exchange that lie at the heart of life, and that are exemplified in his own self-giving and in the Eucharist. He sings:

Meal and dance both call for participation—neither can be known at a distance. And while Jesus has done his part in initiating these movements, he makes it clear that we must continue the work of self-giving (and receiving) if the Heart of God is to go on unfolding. All creation is engaged in the dance. Will we do our part?

While The Acts of John may not reflect historical memory (i.e., “this is what really happened at the Last Supper”), what it does tell us is that second-century Christians were writing about circle-dancing in the context of the Eucharist—which means there’s a high likelihood they were circle-dancing in the context of the Eucharist. This scene gives us a glimpse of what their worship may have looked like—and it looks very Sufi! Or, rather, Sufi worship looks very early-Christian. Because although this form of worship may have died out as Christian gatherings increasingly took on the flavor of the Roman Imperial court, it stayed alive in Near Eastern lands, and resurfaced—and continues—in Sufic Islam.

The central teaching of Sufism is the oneness of existence—the oneness we share with each other, with creation, and with God. In the Eucharist, and the Eucharistic exchange that we see at the heart of all life, the same truth is affirmed. As the elements of bread and wine are shared around the circle of the faithful, we’re reminded that all of life is interwoven—each of us into the other, all of us into creation, creation into God. Christ in broken bread and out-poured wine, in grapes and wheat, in earth and water, in you and me.

I opened this reflection with words from the Rule of Life used by members of The Rivendell Community, a body within the National Association of Episcopal Christian Communities (if you find yourself looking for a more intentional way to ground your spiritual practice in communal accountability, I encourage you to explore these and other forms of Rule-based living). As with my salmon encounter, it was also two years ago that I applied for postulancy (a period of discernment towards becoming a vowed member) with Rivendell. It’s been a less direct process than I ever imagined (actual discernment has been involved!), and I’m happy to find myself saying “Yes!” to the Community’s Rule and rhythms, in which members are called “to celebrate the Eucharist continually in our lives.” 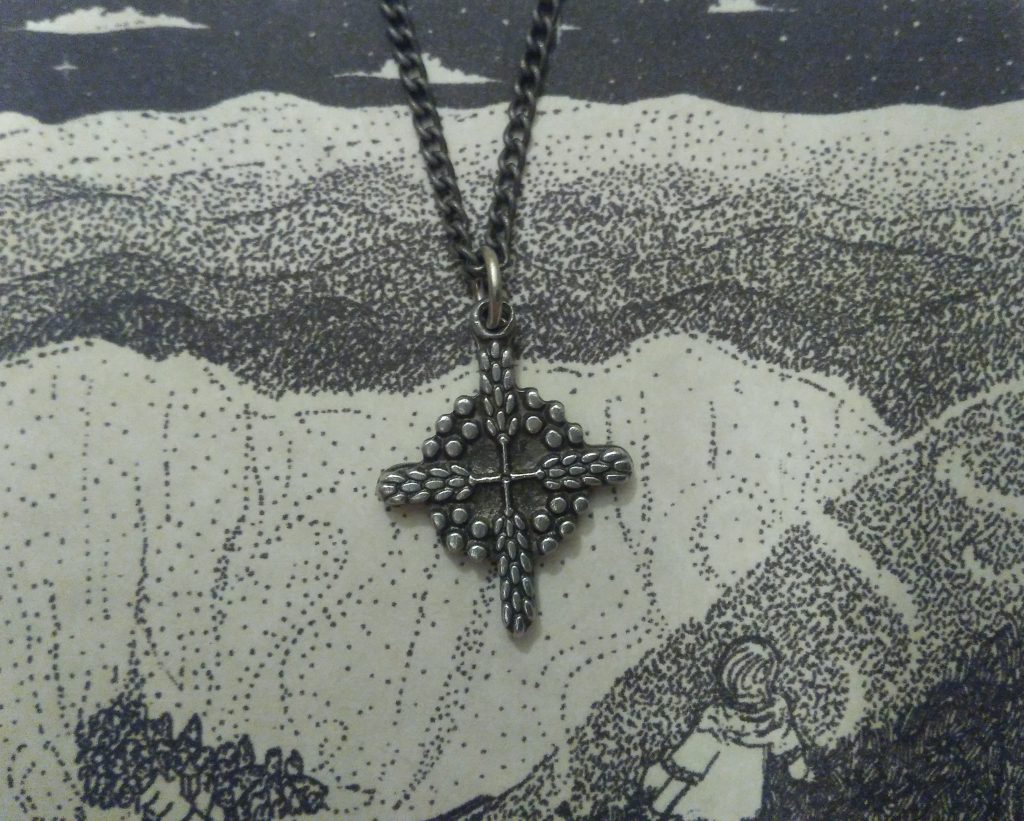 The picture above is of my novice cross, itself a symbol of the Eucharistic universe. As the Community’s Founding Guardian, Mother Virginia Brown, writes: “The design represents the natural products with which the Eucharistic elements are made: stalks of wheat form the cross itself, and grapes form a circle as in a Celtic cross. Thus the cross symbolizes the Eucharist as the pattern of our life.”

She continues, with a particularly Teilhardian note, “the whole wondrous process by which seed is transformed into grain, grain milled into flour, flour baked into bread, and bread laid on the altar, consecrated and filled with the very life of Christ, broken, and given” is “an enacted parable, a model or paradigm, of our own lives. Grace builds on nature, zoe on bios, Christification on the most ordinary, mundane circumstances. As we offer ourselves to God, our little offering is taken up into the great, all-sufficient self-offering of Christ”—taken up into the Eucharistic Universe.

From the salmon spawning, to Christ dancing, to each and every meal we share—in all our pain and love-making—the same pattern is present: give and receive, and give, in love. And from this, the Heart of God unfolds.

May it be so in each of our lives, and may we each celebrate Eucharist in—and as—every moment. Amen.