FOR THE EPISCOPAL CHURCH IN SOUTH CAROLINA DIOCESAN CONVENTION

Bill Redfield, looking very professional and galvanized in his being, had to leave the board meeting immediately following the closing, ready to board a plane for South Carolina. We knew he was headed into new territory and had shared a prayer for his work with him before he left. Bill was bringing his ever-deepening understanding of the Wisdom tradition, within years of experience developing “Wisdom of the Body” (in part with Deborah Welsh and Lois Barton for their Wisdom Schools), to The Diocesan Convention of the Episcopal Church in South Carolina. There he was prepared to risk becoming vulnerable in the best sense of the word. Bill was about to meet 250 people who were suffering a ‘devastating’ rent in the fabric of the Diocese with what he was calling “Wisdom of the Body: An Experiential Program of Healing.”

What follows is a teaching; an instructive illustration of Wisdom in action. Over the next few posts, Bill shares the progression he led this particular group through, along with his commentary. Born out of a “challenge (that) seemed to call out for an increase in Being,” these five steps began with Wisdom of Our Physical Bodies, and moved through Wisdom of the Body as the Faithful, Wisdom of the Dying Body, and Wisdom of the Body of the Gathered Faithful—Entering the Great Dance of Life, to conclude with, The Body and Blood of Christ. Bill tracks this process for us, in these five sections, on Breaking Ground, following this introduction.

I encourage you to read these, and if it resonates, notice where in yourself the work of Wisdom takes root, grounds and flowers in your own body and in your own work in the world (whatever the field). Take courage in Bill’s example of the integration of his personal work with what is calling him to his work in the world. We begin with his introduction to you, as reader, followed here by his foreword to the concentrated, experiential, two-hour program he designed to take more than 250 participants to the heart of the potential for healing. And check back in with Breaking Ground for the rest of Bill Redfield’s seven-part series on this experience.
With love, Laura Ruth

One of the cautions of this Wisdom path that I often remind people of concerns the passage of time—it takes time to integrate the insights we touch in our practice and receive in the teachings.

Because Wisdom has practically nothing in common with a curriculum that can be intellectually learned, its integration usually takes weeks and months, if not years. While sometimes there may be an instantaneous download, for the most part, it is a long, slow fermentation.

Is it possible to introduce Wisdom teachings, experiences, and practices to a group—say, a really large group of over two hundred—in a short period of time—say, two hours?

Well, this was the invitation that was issued to me and in the context of an Episcopal diocesan convention. And, as if it had been issued as a distinctive calling, I gave my unqualified “Yes.”

Interested in exactly what happened, and my thinking and planning in anticipation of the challenges…? Read on…

Wisdom of the Body: An Experiential Program of Healing
for the Episcopal Church in South Carolina
The Rev. William C. Redfield

My dear friend and former bishop Skip Adams is serving as the temporary Bishop in South Carolina. Without going into a great deal of gory detail, the diocese there has been decimated by the conservative contingency that split from the Episcopal Church five years ago, taking with them about 50 churches and 20,000 parishioners. Since then, the two sides have been locked in a complicated legal dispute over the name, the leadership, and an estimated $500 million worth of historic church properties that the conservative group claimed in the split. 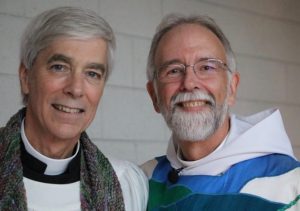 Skip asked me to come down to present at their diocesan convention that was to be held at Hilton Head. He had already chosen “Wisdom of the Body” as the convention theme, and he had thought specifically of me as the presenter. He expected there to be 250 to 300 people present.

In an extended telephone call a month before the Convention, Skip spelled out some of the details of how the folks in his diocese had been affected by this split. He used words like “devastated” and “traumatized.” It was clear to me right then that my presence there needed to be more than some sort of inspiring little presentation, after which they would simply go on with their convention work. To me it seemed to cry out for a real experiential intervention through which the people might be given the opportunity to change the interior landscape of their own hearts toward healing.

But clearly, it would be more than challenging to orchestrate this. This was a large number of people to work with, not to mention the fact that I had no previous history with them. I would only have two hours. It would also be an unlikely setting to do this or any other kind of experiential work. All things considered, many might would likely be in over their heads and resistant if not downright reactive.

Nevertheless, I felt an undeniable call to this healing work, and I knew in order to really reach people and have any kind of lasting effect, it needed to be powerfully experiential.

When I shared my idea with my colleague Deborah Welsh, she had some serious reservations and tried very reasonably to dissuade me. I told her that this was not a calculated risk; there was nothing calculated about it at all. Instead, I felt irresistibly called to this healing work. Knowing me as she does, Deborah gave up trying to convince me and actually guided me through some very helpful fine-tunings.

A big factor for me was the desire I felt to assist Skip in his ministry in South Carolina. He has been a dear, dear friend for many years, and, while I served in Central New York, he was always a constant support to me—especially as I was “coloring a little bit outside the lines” in my ministry. His love and devotion to his people in South Carolina was very evident, and I wanted dearly to honor that.

I can’t say that I didn’t have some reservations as, in my planning, I continued to consider the risks and possible pitfalls. Nevertheless, that sense of call remained.

Instead of watering down my plan for this experiential work, I considered instead how I could increase the chances for success. 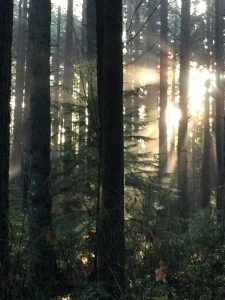 The challenge seemed to call out for an increase in Being. I realized that I could call in powerful prayerful support and energetic assistance. I put out this request to about three or four dozen people—folks from both my Wisdom and Nine Gates communities and some close friends. I asked them to be intentionally present with me in these two hours of my work with the people at the convention. The response I received was overwhelmingly positive and encouraging; they would energetically stand with me. As the time approached, I could feel the growing strength of their support. While the work remained as challenging as ever, I was experiencing a gathering heft and a sharpened intention. Although it sounds incredible to say, I could sense the anxiety transforming itself into anticipation.

Because of some travel complications (like a cancelled flight), I arrived at Hilton Head later than I had planned, but in time for the Friday night Convention Eucharist. I hung on every word of Skip’s sermon that night, trying to literally climb onto the wavelength of his intentionality. Dinner that night with Skip and his wife Bonnie also helped to bring me to a deeper and fuller sense of presence. Although I had physically arrived in Hilton Head some hours before, now I started to feel energetically present in a whole new way. I covered some of the presentation details with the diocesan staff late that night so I would be ready to go first thing in the next morning, right after Morning Prayer. I would be first up.

As I had always done in the parish before Sunday services, I spent extra time in my meditation early the next morning, intentionally working to strengthen and deepen that sense of presence. This, too, was an essential part of my preparation.

As the time arrived, any nervousness had disappeared. Rather than a performer looking out at his audience, when I looked out at the assemblage of people, I saw the pain body of this diocese. I could feel my heart opening to them, and I felt myself extending my energetic arms around them. I was ready. 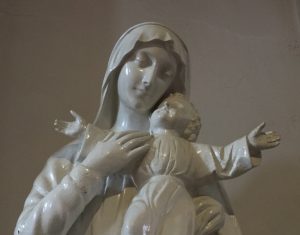 But before I actually began my presentation, I asked for a point of privilege. I expressed my need to connect with them, even if only fleetingly, before I started. Because we were meeting in a church, albeit a very large one, the seating configuration was in rows (pews). This obviously left a lot to be desired and actually poised a dilemma to some of the pieces of work I had planned. Nevertheless, I walked slowly up and down the aisle and tried to make brief eye contact with everyone present. There is something about engaging others in this way that helps me (and I hoped helped them) to get fully on board. 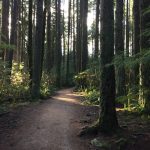 And, just to give full disclosure to all of the participants at the Convention, I also confessed to having a small and largely invisible army standing with me in prayerful support and energetic assistance in this work. Saying that out loud reminded me of its profound truth and maybe awakened some of those present to this felt reality. I was not alone. Not by a long stretch.

Visit Breaking Ground to read the script that charted my trajectory over the next two hours. Although I didn’t stick to it word for word, I knew I had only a set amount of time, and I wanted to work methodically through its course all the way to its conclusion. Beside the script that I had prepared, I also include the music that I utilized in the background at different points.

You will also find Bill’s commentary on the script and the experience, in the next six postings of “Wisdom of the Body: An Experiential Program of Healing” right here on Breaking Ground.

The Rev. William C. Redfield prepared this material for a presentation at The Diocesan Convention of the Episcopal Church in South Carolina, Hilton Head, South Carolina, Saturday, November 11, 2017. You may read more about Bill on the Our Teachers page of this website.