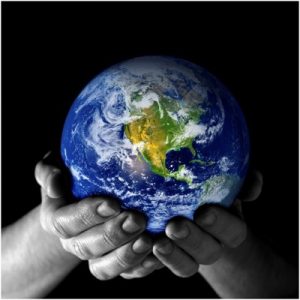 I loved this chapter!—particularly the way it weaves together and synthesizes the voices of Teilhard de Chardin, Ewert Cousins, and Karl Rahner—each of them pointing in their own way (planetization, a 2nd Axial age, and the “world church”) to a truly universal, incarnate, global understanding of Christian spirituality.  Wow!  I’ll share a few words by way of summary here, before our Zoom book study group meets this Friday… but know that they’re rushed and inadequate to the wonders Fr. Bruno actually unfolds in these final pages.

In this fourth movement, Fr. Bruno explores Teilhard’s vision of a coming human unity: in Teilhard’s words, “there is only one way in which the tide can flow: the way of ever-increasing unification”… the present “social in-folding” is simply an extension of the “process of cosmic in-folding which gave birth to the first cell and the first thought on earth.”  Barnhart points to the ways in which large scale human tragedies and disasters (the two World Wars, for example) “rather than fracturing and dispersing humanity, have forced it more tightly together.”  We can only hope our current climate crisis will do the same.  There is an insistence here that there is no ultimate going backwards (words that will sound either hopeful or naive in the Age of Trump!).

For this new human unity to truly emerge, however, Barnhart says we will need “the attainment of a new degree of 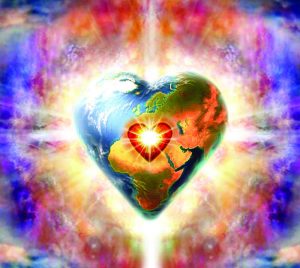 love, a shift from the emergent ‘global brain’ to a still undiscovered ‘global heart.’”  Can we begin to feel, see, as one heart?  Not only one human but one planetary heart?  Expanding the sphere of our love is the most crucial and planetarily necessary thing any of us can do at this moment.  Our sphere of care and concern must extend beyond “our kind” (race, religion, nationality, species) if we want “our kind” to survive at all.  For as it turns out, the conditions for the world’s flourishing are also the conditions for our own flourishing—a point we’ve majorly missed these last few centuries.

Barnhart then brings Ewert Cousins into the picture with his vision of a “Second Axial age,” a period (which Cousins envisions us entering now) when the collective- and earth-centered sensibilities of tribal and indigenous spiritualities are coming forward once more to be integrated with (not simply to replace) the rational and individual focuses of First Axial spiritualities—but now at the global level (we are one tribe, one earth).  Finally, Barnhart brings in Karl Rahner, who specifically envisions the Church within this emerging, global and integrative understanding, seeing the Gospel more fully and authentically proclaimed in a new context of openness and pluralism.

For Barnhart, the visions of Teilhard, Cousins, and Rahner are “three expressions of a single awakening process of divine incarnation taking place in history, an awakening that, in our time, has been dramatically accelerated.”  He then points us toward a complementary transcultural understanding of holiness, human maturity, and wisdom rooted in the visions of Simone Weil, Thomas Merton, and Bede Griffiths.

Weil argues that a universality once implicit in the lives and teachings of Christian saints must now become explicit: “It has to permeate our language and the whole way of our life.”  Merton presents a vision of “final integration”—a state of human maturity that transcends “the ego and all cultural limitations,” that is “cosmic and universal,” and in which a person is “identified with everybody.”  And finally, Griffiths “affirms the objective existence of a unitive—and universal—spiritual and philosophical tradition within the world religions” which the religions themselves must recover.  Each author is pointing in their own way to spiritual knowledge and transformation as something nonexclusive, a human and global process. 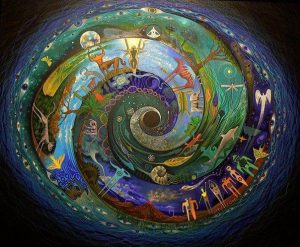 Barnhart then ties this into his understanding of incarnation—the cornerstone of his entire project—and explores the ways in which human beings (and our byproduct, institutionalized religion!) too often resist the incarnational movement.  From the spiritual ladders of Platonized Christian spirituality to the institutional ladders of rigid religious hierarchies, we keep putting things between ourselves and God, moving God “up and out”—thereby missing the entire point (or direction) of the evolutionary and cosmic unfolding itself (God has spent 14 billion years working to get down and into all of this!).

Because the Church didn’t often seem to get this, Fr. Bruno argues that “the incarnational movement of Western history had to move outside the church” into what he calls “secular incarnation.”  He sees this happening in movements like Marxism and in all secular currents that work toward “universal human rights, civil rights without racial distinction, the universal dignity of the human person, the injustice of slavery, the freedom and equality of women, etc.”  He boldly concludes that “to the extent that the ‘formal’ church (both of East and of West) has resisted incarnation, history has moved beyond it, pursuing its incarnational trajectory.”

Fr. Bruno then ties incarnation back into nonduality, the focus of Movement II.  He writes:

“Incarnation is the ‘event of nonduality’ in this world.  Further, our nondual baptismal identity is ‘identical’ with the event of incarnation.  Incarnation is also the principle of history, or of the intelligibility of history.  The converse of incarnation is divinization, or ‘birth in God,’ which is experienced as the awakening of the person.  Therefore, our two principles or dimensions (horizontal and vertical)—history and identity—intersect or coincide at this point of incarnation, which becomes the center of a cross.”

And again, “The Christ-event is a descent of the ‘center’ from […] the nondual Absolute, the One, into the whole human person: body, soul, and spirit; into the human center—the heart, where body, soul, and spirit are one.”  This is not only the individual heart, but the global heart that Fr. Bruno has already told us must now be awakened: the heart of the world, the heart of the entire evolutionary, incarnational process.  The “center” descends first into the heart of individuals (Jesus is the “icon” of this process), but gradually and now increasingly (expansively, outwardly) into our collective (global, cosmic) heart.  And so “the Christ-event” is not only an individual (uniquely “Jesus”) occurence, but a collective (global, cosmic) event.  And we are it, and it is everything.

There’s so much more in this chapter!  But this is a start (and Laura Ruth tells me she already has 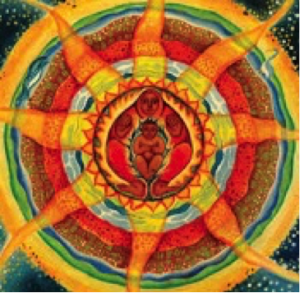 another blog post on this same chapter cooking in her heart, so stay tuned…).  I hope you’ve all enjoyed and been enriched by our shared journey with this text—and if you haven’t read it yet, that these posts may inspire you to do so.  Thank you all so much for making this exploration possible and alive!  I’m overjoyed that it’s happened, and feel so grateful for the wisdom that Fr. Bruno has left behind for us all.

I’ll give him the last word: “While history will continue to flow forward, downward, and outward as incarnation, a perennial spiritual wisdom will continue to swim back, upward, and inward toward its unitive source.  The gift of our time is an opportunity to see the whole living picture and to orient ourselves consciously within it.”  May we use this gift, this seeing, well.  And may we give all that we are to the awakening of our global heart, to the ongoing Incarnation of Christ, world without end.  Amen.