As the new decade gets underway, it feels like an appropriate moment to share one of my earlier essays, which is still to my mind one of the best things I’ve ever written. It was originally published in the 2018 anthology, How I found GOD in Everyone and Everywhere, edited by Claremont School of Theology faculty members Andrew M. 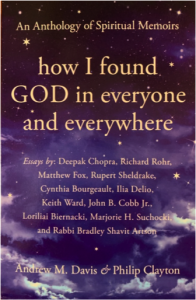 Davis and Philip Clayton and published by Monkfish, our intrepid publishing partner here in Northeast Wisdomland! Compiled in honor of Marcus Borg, this anthology is broadly structured around the theme of Panentheism and features the usual suspects among Christian nondual teachers, including my colleagues Richard Rohr, Matthew Fox, and Ilia Delio. It’s well worth a read in its entirety.

I will be sharing my entire essay in eight successive posts, which will be headed your way in bite-sized doses over the upcoming season of Epiphany.

Part II will be posted here on Wednesday January 15. Look for the next posts to follow Sundays and Wednesdays through January and into early February. I look forward to you sharing your reflections in the Comments section. Enjoy! And Happy New Year!!! May this “year of perfect vision” indeed shed some new light.

I. The Light Within

“So does that mean every time a new baby’s born, there’s less God?”

The pint-sized questioner was my grandson Jack, at the time four years old and clearly wrestling with the theological implications of the recent birth of his baby sister. His other grandmother, of a more evangelical persuasion, had been coaching him on the basic tenets of Christian belief: 1) that God is everywhere, and 2) that human beings are not God. With his four-year-old, preoperational-logic brain in virtual overdrive, Jack was trying to reconcile the admittedly challenging interface between these two givens.

I have to admit, his question stopped me dead in my tracks. Not just the perspicacity of his insight, but the very notion itself. Never during my own childhood would the thought have even crossed my mind that a human being might be a space where God was not. Raised in the rolling countryside of southeastern Pennsylvania, I grew up in an easy, natural intimacy between the divine and human realms, an intimacy intensified through the regular silent worship at the local Quaker school I was privileged to attend. To be sure, Sundays brought my weekly encounter with Christian Science where it was drilled into me that “there is no life, truth, intelligence, nor substance in matter.” But the rest of the week I was free to roam the fields and forests and drink in exactly the opposite message. From the first moment my young self-reflective consciousness came online, about Jack’s age or a little younger (I remember myself standing in a pumpkin patch just at sunset in late October, everything brilliantly ablaze in orange), I knew then and there that this holy, intimate radiance suffusing the picture was in me and in everything, if for no other reason than because it was from the inside that all of this seemed to be emerging. “Ah,” the Quakers nodded encouragingly, “the light within!” And they told me it was in everyone.

In due course, at Christian Science Sunday School and Methodist Vacation Bible School, we kids all read the Bible stories and learned all about those epic Old Testament battles against something called “idol worship.” We thrilled as Moses smashed down the golden calf and sneered over our shoulders at those misguided Baal worshippers or Phoenicians or Canaanites with whom our Hebrew heroes were locked in mortal combat. I didn’t know exactly what “idol worship” was at the time, but I knew it had to do with trying to put God in a box—and that the consequences for disobedience were severe. (The Ten Commandments, duly memorized as part of our Bible School experience, left no doubt on that score.)

Blessedly, it never occurred to me back in those early days of my awakening that my cherished secret, that gently dawning light within, might be seen in some quarters as “putting God in a box.”

Look for Cynthia’s next post, “I Am Not a Space that God Does Not Occupy:” Part II. Panentheism, Wednesday, January 15, 2020 right here on the Northeast Wisdom Home Page.