This is Part II of an eight-part Northeast Wisdom Home Page Blog series that began with “Part I. The Light Within” posted Sunday January 12, 2020. Cynthia introduced the series with this message:

As the new decade gets underway, it feels like an appropriate moment to share one of my earlier essays, which is still to my mind one of the best things I’ve ever written. It was

originally published in the 2018 anthology, how I found GOD in everyone and everywhere.

I will be sharing my entire essay in eight successive posts, which will be headed your way in bite-sized doses over the upcoming season of Epiphany. I look forward to you sharing your reflections in the Comments section. Enjoy! And Happy New Year!!!

May this “year of perfect vision” indeed shed some new light.”

In “Part I: The Light Within,” Cynthia shares an experience of an immediate knowing that she had as a young child, one evening in the sunset light of a pumpkin field:

“…this holy, intimate radiance suffusing the picture was in me and in everything, if for no other reason than because it was from the inside that all of this seemed to be emerging. ‘Ah,’ the Quakers nodded encouragingly, ‘the light within!’ And they told me it was in everyone.”

Cynthia watched her grandson wrestle at four years old with how to reconcile his young life experience with what he had been told were “the basic tenets of Christian belief: 1) that God is everywhere, and 2) that human beings are not God.” Part I closes with her reflection:

“Blessedly, it never occurred to me back in those early days of my awakening that my cherished secret, that gently dawning light within, might be seen in some quarters as ‘putting God in a box.’” 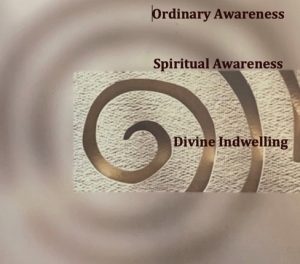 seminaries. Part of the standard presentation features a way of introducing the concept of contemplative prayer by framing it in terms of different levels of consciousness: our ordinary awareness (task-oriented and self-referential), spiritual awareness (more open-ended, receptive, and emotionally attuned) and last but not least, the divine indwelling, through which God “himself” is personally conscious in us and as us.

“No, no, that is quite wrong. You are in error.” Inevitably there would be a person standing there at the break, right in my face, urgently challenging me on this last point. “There is nothing of God that indwells the human person,” this person would categorically proclaim. From there, the argument would go in either of two directions: a) we humans have been so ineradicably contaminated by sin that we have lost the image and likeness of God, or b) the whole thing is pure pantheism.

This episode was repeated with such predictable regularity that I eventually came to expect it. Clearly the whole notion of a divine indwelling, for all its certifiable theological orthodoxy, continues to make many traditionally reared Christians squirm.

I draw in my breath and begin again, “Yes,” I try to explain to this person, “for sure, if I were claiming that I am God or that God and the world are the same, that would be pantheism.

“But surely God can inhabit this world of ours, indwell and suffuse it without getting stuck there…”

“Oh, you mean you’re a panentheist!” comes the rejoinder. I roll my eyes and cede the point, all the while silently gritting my teeth.

For you see, mea culpa, I have to admit that I do not take easily to being labeled a panentheist. Yes, I know that most my other theologically progressive colleagues are all in favor of it, but the term has always made me distinctly uncomfortable. It’s not so much the concept that bothers me; it’s the word itself. Like a “jet airplane,” it’s one of those terms that tries to define itself in terms of a prior term (in this case, pantheism), to which it offers an ostensible improvement.

Panentheism hence looks like a more refined version of pantheism, an update that disposes of its major shortcomings while still implicitly keeping the paradigm in place.

But in fact, it’s the entire paradigm that’s the problem in the first place, and I suspect that things are not going to improve (either for our schools of theology or for our planet) until we gird up our loins and stop en-abling it.

As our world hovers on the threshold of a second axial age, I believe that it’s time to recognize pantheism as a concept whose era has long since come and gone.

It has no place in a post-Einsteinian universe, is radically subversive of all efforts toward a unified planetary ecology, notoriously unfriendly to mystics, and just plain old existentially wrong. This old wineskin’s simply gotta go before we can break out the new wine of an authentically nondual Christianity.

I am not saying this simply for the sake of being controversial. These conclusions have been slowly growing in me for a very long time now, to the point where I simply cannot see the situation in any other way. Over the next few blog posts I hope to share with you a bit of the story of how I have come to see things in this way—in particular, the three “aha” insights that changed everything for me.

Cynthia says, “how I found GOD in everyone and everywhere is an anthology of spiritual memoirs, edited by Claremont School of Theology faculty members Andrew M. Davis and Philip Clayton and published by Monkfish, our intrepid publishing partner here in Northeast Wisdomland! Compiled in honor of Marcus Borg, this anthology is broadly structured around the theme of Panentheism and features the usual suspects among Christian nondual teachers, including my colleagues Richard Rohr, Matthew Fox, and Ilia Delio. It’s well worth a read in its entirety.”