Our Northeast Wisdom study of The Wisdom Way of Knowing by Cynthia Bourgeault is off and running!  If you 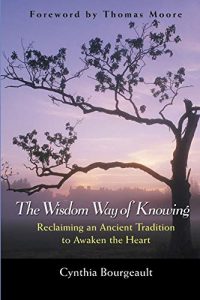 missed Bill Redfield’s reflection on Chapter I, you can find it here.  If you’re not participating in the online group, we’d still love to have you join the study in imaginal space, connecting from wherever you are with the energy of our collective engagement with one of our community’s core texts.  As you read along, touch back here each month for a chapter synopsis and reflection from a Northeast Wisdom council member and feel free to share your reflections below.

This month we’re exploring Chapter II, “How the Christian West Lost Its Wisdom.”  Cynthia begins by reminding us that the earliest followers of Jesus didn’t follow him because they’d read about him in the Gospels–that he was the Son of God who rose from the dead–no, all of that lay up ahead.  There could be no “enlightened self-interest” at work.  Rather, they followed Jesus because something in them recognized something in him–“a meeting of hearts in the present moment that somehow conferred full knowledge and consent.”

Here Cynthia quotes Bruno Barnhart, who reminds us that Jesus’ power as Wisdom master lies in his ability to “awaken that which lies at the core of my own being.”  This is what the earliest disciples met in Jesus (and through that meeting, met in themselves)–first in Jesus as a person of history, and then, increasingly, as a living, imaginal presence–available directly through the heart.

But little by little, connection with that direct, living presence began to fade.  In the fourth century, the Jesus movement merged with the forces of Empire, became the official state-religion, and this direct, intimate mode of heart-knowing was increasingly replaced by the “vicarious knowledge” of creedal statements.  “Following Jesus” began to mean “believing the right things about him.”  As a monastic friend of mine says about this period, “In the great creeds and councils of the Church, we attempted to hammer out the Mystery; instead, we just hammered the Mystery out.”  Heart-centered, transformative knowing increasingly gave way to head-centered, intellectual assent.

A small movement that took commitment and practice to follow quickly became an imperial identity marker.  It was impossible to entrain and maintain “receptivity to higher meaning” on such a vast scale, and there’s little to suggest 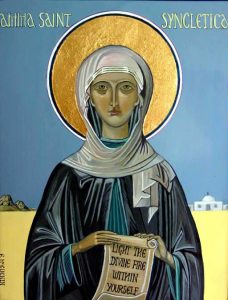 that Emperor Constantine was interested in such a project.  In reaction, the first Christian Wisdom Schools began emerging in the Egyptian and Syrian deserts, where the desert abbas and ammas strove to maintain that earlier, deeper mode of knowing.

What was at risk, and eventually lost in the Western Church, was the vision of theosis, the divinization or deification of the human person (summed up succinctly by St. Athanasius with the words “God became human in order that humanity might become God”).  It’s a vision laid out clearly in early texts like The Gospel of Thomas and The Gospel of Mary Magdalene, and maintained still in the monastic spirituality of the Eastern Church.  But with the rise of a heavy-handed understanding of “original sin” in the West–and its later Calvinist offspring, the doctrine of “utter depravity”–Western Christianity quickly lost its Wisdom roadmap.  In Cynthia’s words, “as they say back in Maine, ‘You can’t get there from here.'”

Theologically, we shifted from seeing the way (and being) of Jesus as the roadmap for human transformation, and instead enshrined him as our divine rescuer–the one who does all the heavy-lifting for us.  In The Gospel of Mary Magdalene, Mary says, “Let us give praise to his greatness, which has prepared us so that we might become fully human.”  It’s the second half of this statement that we’ve lost sight of–we’ve stopped at praising Jesus’ greatness, without embracing the call to become fully human ourselves.

This imbalance is captured perfectly by Br. John Martin Sahajananda, OSB Cam. (a disciple of Fr. Bede Griffiths) in his book You Are the Light: Rediscovering the Eastern Jesus; he writes: 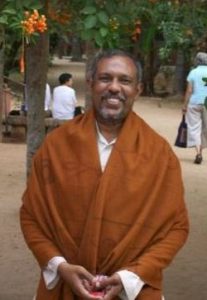 If we are to do the work of Wisdom, we have to put the other wheel back on the cart, embracing a vision of our full human potential.

Cynthia then explores Benedictine monasticism as one of the vehicles in the West that came closest to rolling with both wheels, but without the full metaphysical framework needed to truly turn over the engine.  Even with this tradition’s limitations, the Benedictine container of ora et labora (“work and prayer”) has long guarded Wisdom’s threshold, and forms the backbone of our Wisdom Schools today.

In the next section (“The Sufi Connection”), Cynthia invites us to look further afield to find where Wisdom was most fully alive during its eclipse in the West.  She argues that “While it may be politically incorrect to say so, the case can be made from a Wisdom standpoint that Islam arose in part as a corrective to a series of wrong turns that had jeopardized Christianity’s ability to follow its own Wisdom master and hence to carry the torch of Wisdom into the world. […]  At any rate, Sufism really serves as the bridge between the Islamic and Christian worlds, which belong together as the two halves of one soul.”

She makes this same argument a bit more fully in her Foreword to Llewellyn Vaughan-Lee’s Prayer of the Heart in Sufi and Christian Mysticism.  Here’s a lengthy quotation:

Sufism and Christianity are joined at the heart; of that there can be little doubt. I have come to that conclusion in my own right, in the course of my own twenty-year quest to recover Christianity’s authentic Wisdom tradition. […] In my mind’s eye, I often imagine a kind of hand-off, which may be both historically and politically incorrect but continues to ring with inner truth: that as institutional Christianity became increasingly dogmatic and propositional in its formulations in those centuries following its elevation to the official religion of the Roman Empire, Sufism arose in the cradle of Islam to receive and nurture those teachings on the heart that had first been planted in those near-eastern lands directly from the living heart of Jesus.

Cynthia’s understanding resonates deeply with my own experience, having walked the dervish path now for a decade 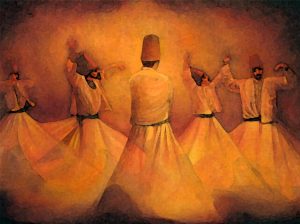 within the Mevlevi Order (Jalaluddin Rumi’s lineage), while also serving the work of recovery and creative renewal in the Christian Wisdom path.  In Sufism, the vision of Insan-i Kamil, or the Completed Human Being, along with a clear metaphysical framework and path, have remained front and center.  Christian engagement with Sufism (and other Wisdom lineages) can sometimes serve as a reboot or jumpstart for Christian Wisdom work, offering an experience of the fragrance of an authentic Wisdom milieu.

After some years of study, I’ve come to believe that the Wisdom Gospels (specifically Thomas, Mary Magdalene, and Philip) are a bridge–the missing puzzle piece–connecting the Christian and Sufi worlds.  These texts bear the clearest expression of the metaphysics that will later reemerge as Sufism, and Sufism offers a living framework of teaching and practice that can breathe life and understanding back into these texts, which have for too long existed outside the context of living communities of practice and transmission.

Cynthia then turns to the work of G. I. Gurdjieff (1866-1949), an Armenian Wisdom teacher who traveled and 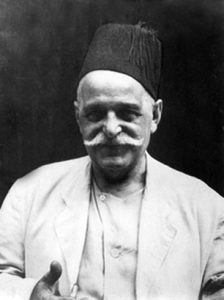 studied throughout Egypt, the Near East, and Central Asia, eventually offering his own synthesis of Wisdom teaching (drawing from Eastern Orthodoxy, Buddhism, Sufism, and other mysterious sources) that has subtly influenced the spiritual landscape of Europe and North America now for several decades.  She explains that the wisdom and influence of Gurdjieff, and great Sufis like Rumi and Ibn Arabi, is present in the teachings she will unfold in the coming chapters.

Finally, she concludes with a reminder that we do not ultimately find Wisdom by tracing a lineage “backwards” through time, but rather more deeply into the Now, into our ever-present Source.  She points out that “original” doesn’t mean “first in time” but rather “closest to the Origin.”  Wisdom may appear to have gaps and dormancies in its transmission throughout history–it breaks down, goes underground, and sometimes seems to totally disappear.  But no matter; Wisdom is not dependent upon linear causality and transmission.  It arises as needed, and as we are ready to receive it.

Northeast Wisdom encourages local Wisdom Practice Circles to revisit
The Wisdom Way of Knowing: Reclaiming an Ancient Tradition to Awaken the Heart
in your own local gatherings this year. May we all glean the ‘next layer accessible for each of us’ as we engage more deeply. May this book re-inspire our Wisdom Community this year! To find out how to get the book, and view other recommended books, please go to our Resources page or click here for the book.