Welcome to Cynthia’s third commentary on the “Web” exercise in this Pandemic Homework series, details of which you will find at the end of this post. Please post your comments below!

In the meantime, Cynthia has extended an invitation: 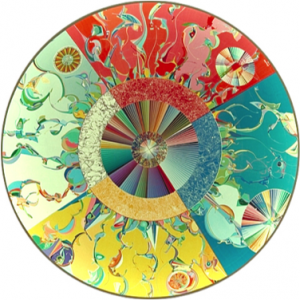 Today, Thursday, May 21, Ascension Day, I will offer myself in the Four Ideals Exercise on behalf our entire planet. Anyone care to join me? Not nailing down a specific time…just “whenever…” real time will always flow into the infinite NOW.

I wonder if our casually joined atmospheres could indeed “warm the earth” on this day of cosmic arising….

In regard to the special invitation above, see the “Four Ideals” (pp. 229-240) in the book Gurdjieff: Mysticism, Contemplation & Exercises. If you do not have access to the book, you can find resources available online.

Now, back to “warming the earth” through the “Web” exercise! The first three commentaries on the “Web” exercise speak to the relationship between a personal atmosphere and the web that comes into being through group work together, and remains, undispersed, when apart.

Gurdjieff’s answer—offered allusively but fervently—is that it can indeed. And if this is the case, it opens before our Wisdom sangha a powerful new avenue of service, together with a very stringent road to tow if we are to make good on it.

Azize makes the invitation explicit in his lean, four-bullet-point commentary:

“Second, says Gurdjieff, when the people whose atmospheres form the web come together with a common aim, there is a warming in the webs. This invisible reality is not something neutral: It is positive. It also means that a conscious aim, especially perhaps a common conscious aim, is an active element not only for the group, but even for society, represented here by the city of Paris” (p 201).

While Paris may indeed be intended only to “represent” the larger society, I think it’s important not to lose sight of the particular context here. Azize notes the date of this exercise as May 25, 1944—or in other words, less than two weeks before the allied forces will arrive on Normandy Beach and begin their relentless drive east. Three months to the day later, Paris will be free, and the former “Fête St. Louis” will have been rebaptized as “La Fête de la Liberation.” 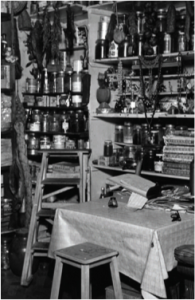 Throughout the entire dark and terrible four years of the occupation Gurdjieff had held his ground right there in Paris. Unlike most other spiritual teachers of his era, who had fled to places of greater tranquility to carry on their spiritual work undisturbed, Gurdjieff had stayed put, finding the conditions for transformation not in tranquility but in fierce presence. From his small apartment less than a mile as the crow flies from the Nazi command post on the Place de la Concorde, he simply went about feeding people, spiritually and literally. Drawing on his proverbial skills as a magician and wheeler-dealer, he somehow managed to acquire valuable stockpiles of staples and even gourmet items. The staples he stored in a back pantry, accessible through a back stairwell that was never locked. The gourmet fare he laid out in lavish banquets before whatever assortment of pilgrims happened to assemble at the table that night.

There was teaching, inquiry, liberally flowing Armagnac—and a suffusion of love that still blazes in the hearts and writings of those students blessed enough to sit at his feet during those times. His teaching became simpler, more direct, more overtly religious, more compassionate and universal in its focus. He was literally warming the atmosphere of Paris.

Some of you may know of the white-knuckle drama unfolding at the same time—grippingly recorded in the book Is Paris Burning Yet?” Recognizing that the German retreat was inevitable, Hitler had laid in place an elaborate scheme to leave as much damage in his wake as he could. Bombs had been laid beneath the celebrated monuments of Notre Dame and the Louvre. All was in readiness for the obliteration of a thousand years of Western cultural history. The only thing still awaiting was the command from the German commanding officer, Dietrich van Choltitz, poised there on the Place de la Concorde.

Somehow that command never came. Like a tide that reaches its flood and then noiselessly recedes, so the German army of the occupation simply receded. No decision was ever made NOT to bomb Paris; the moment simply slipped away. No one knows exactly why.

That is the sort of thing that can happen when an atmosphere is warmed.

In linear causality, of course, there is absolutely no way of proving a connection between these events. In imaginal causality (that “higher dimension” Azize referred to where conscious work takes place) there is no way of NOT seeing it; the lines of causality cross vividly before your eyes—in the web.

I am not saying that Gurdjieff deliberately set out to accomplish that result; almost certainly he did not. It never works that tightly. He simply felt in his great heart the atmosphere of a Paris grown brittle and mineral under the occupying forces and undertook to supply the missing element. Call it food, call it abundance, call it love; without it the human spirit starves, and life grows frozen and intractable. When the atmosphere thaws—when even in one tiny corner of it life becomes flowing and supple—then something new is possible everywhere. For as Gurdjieff pointedly observes, “If one current comes in at one point, it shall arrive everywhere; if one sensation of warmth is in one point, all the points shall feel the heat. Picture how what happens in one place happens everywhere” (p. 201).

I lay this story before your creative imagination to invite the Wisdom Community to envision a broader and bolder way that we might intentionally work in the world. A web is underutilized if we only use it to shore up our personal sense of safety and connectedness within our immediate group. It can more powerfully be used to offer direct transfusions of hope, courage, compassion, and resilience to an entire planet grown dark and mineral for want of these things. It can begin to warm the atmosphere in the inner ground, so that new movement in the outer ground becomes possible. 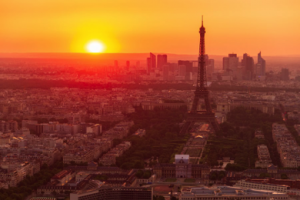 There are cautions and protocols around this kind of work, essentially encapsulated in the classic monastic vows of “chastity, poverty, and obedience.” I will be looking at these in my next post. But for now, let’s stay with the extraordinarily high possibility being laid before us here: that a “warmed atmosphere” constellated within a group through the melding of their common aim can then be turned outward, where it can indeed “have a reciprocal action on a whole city.” Even a whole world.

The Pandemic Homework posts include a series of “Commentaries on Elements of the Exercises,” which refer to the six Gurdjieff exercises that are the first item on Cynthia’s to-do list. She says: The (six) exercises I have recommended are all examples of what Gurdjieff calls “transformed contemplation”—and in direct cognizance of the needs of our present global crisis—we receive something for ourselves, we offer something back. Each of these exercises highlights a slightly different aspect of this and works on a slightly different skill set. The Commentaries are posted as follows: 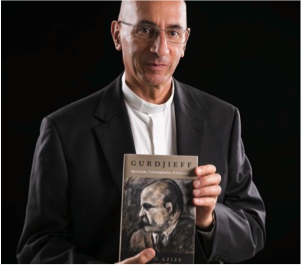 Image credits from the top: Morning Star by artist Alex Janvier, courtesy of the Canadian Museum of History; Gurdjieff’s pantry in Paris, image courtesy of the Gurdjieff Foundation of New York; Montparnasse, Paris, photo courtesy of Henrique Ferreira, Unsplash; photo of Joseph Azize with his book, courtesy of his website, linked above.