In May of 2020, Allen Bourque spoke with Laura Ruth on behalf of the Northeast Wisdom website, to talk about how his three decades of work in the Taoist tradition interfaces with his love of the Christian Wisdom tradition. Allen, Laura and Kerstin Lipke worked together for five years during Wisdom retreats at Hallelujah Farm, in New Hampshire. Beginning on June 16, 2020, Allen is offering a zoom course on Taoist practice for the Wisdom community called “Taoist Practices for Our Emergent Reality: Grounding, Embodying and Extending Our Hearts.” You will find more information about the course at the end of this post. 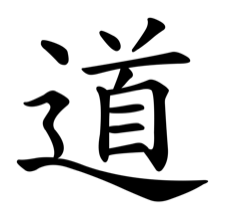 AB: I want to bring out three core aspects of Taoism, how these dovetail with facets of Wisdom Christianity, and how together they bear on our current world transition.

The first issue is the practices themselves, which are the primary offering I make. Since ancient times, Taoism has been, fundamentally, a practice-oriented tradition. In fact, the title of the original text—which pre-dates the Tao Te Ching—is Inward Training. Those practices are most often done communally as well as privately and the practices are far more central to Taoism than belief systems as we understand them. Another important element is that the practices are based on a quiet observation of our internal and external environments. Finally, as I’ll go into in a moment, relationality is emphatically a key part of that “inward training.”

The second issue is that since its original codification in 350 BCE, Taoism has continuously regarded humans as a Body-Mind-Spirit-Heart unity. All true Taoist practices embody this approach and affect all aspects of our being. I have found some of these practices beautifully overlap with our contemplative Wisdom practices while others complement them.

The third issue is that chaos—or Chinese “hundun”—has always been recognized as such a central part of the human process that we would do well to consciously engage with it. A modern commentator has translated the god Hundun as the “Ancient God of Confusing, Creative Chaos”! Taoism guides us to face, embrace and explore what we already have right before us.

The dance between these three themes has meant that over the millennia of Chinese history Taoist schools, groups, and organizations have been born, evolved, and died off as new schools, groups, and organizations emerged to replace them. Thus, Taoism has a tradition (or perhaps an anti-tradition) of reinventing itself over and over again. The result is we have seen more versions of Taoism than in any of the other Great Traditions. This addresses the question of why we find no “Taoists” on the interreligious and interspiritual circuits!

LR:  I’d like to know something more about your background and how you’ve experienced these practices. 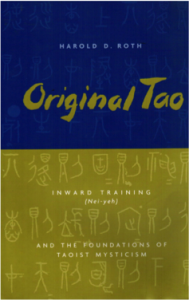 AB: I began studying tai chi more than 30 years ago. Tai chi is of much more recent vintage than Taoism but sits within the tradition of Taoism and is the primary vehicle in the West that people encounter Taoism. I’ve also studied several of the related internal disciplines of the East, of which there are many, including the meditative aspects. For the past several years I’ve been teaching at Brookline Tai Chi here in Massachusetts as well as in various contemplative and Wisdom settings, including the annual Ingathering in Stonington Maine, and at Hallelujah Farm. And I’ve done workshops in New England in collaboration with Fr. Bill Sheehan.

In addition to Centering Prayer and my recent delving into the Gurdjieff exercises, I’m very much aligned with the beautiful and simple characterization of tai chi as “stillness in motion and motion in stillness.” Doesn’t everything come out of that?

LR: Are the students quite different in the regular tai chi school and the contemplative settings?

AB: Oh, absolutely. For almost all students at the tai chi school there’s a constant need to draw students back to the quietude and the simple practices and to really value that. Interestingly since the recent crisis there seems to be more interest in the meditative. Next session I expect to be teaching a course called “Stand, Walk, Sit, Breathe” which emphasizes the quietude but still has enough movement to energetically enliven our bodies. And, since it’s online, people can join from anywhere.

When I’m teaching in Wisdom settings, people are already adapted to the meditative, so there’s already a foundational piece in place and we can journey directly to the enlivening of our full bodily presence.

LR: Can we circle back to the heart and relationality that you mentioned in your first comments?

AB: Surely. To paraphrase the first stanza of that original Inward Training text: when the “vital essence of all things” flows between the heavens and earth and is “stored in the center of the chests of human beings, we call them sages.” Subsequent stanzas refer to the “heart.” A sage is defined as someone who brings a “heart-centered order” to the “myriad things” or “ten thousand things.” These “things” refer to all the elements of our lives: our dreams, our toenails, our relationships, as well as the whole context of our particular lives. 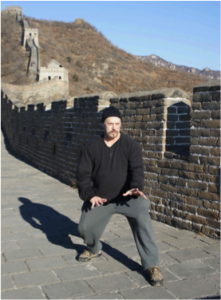 That stanza IS the downbeat, the Genesis of Taoism. So, an outcome of these Heart Mind Body unity practices is a “well ordered heart-mind within you,” from which “well ordered words issue from your mouth.” This heart centered responsiveness to our immediate lives individually and communally takes precedence over any tradition and beliefs.

LR: I’m curious how your involvement with Taoism relates to your experience as a Christian contemplative.

AB: I actually only opened to the heart aspect of Taoism after I landed in my true heart through Centering Prayer practice. And I find nothing in the Taoist tradition that expresses the deeply personal sense of the Divine and of Christ that I experience through my Christian Wisdom practice and the Eucharist. For me there’s a tenderness that develops more fully out of my Christian background. I’m certainly no Taoist! But I love the practices and will continue to drink deeply from that pool.

LR: At Stonington last year you had a picture of a Chinese Christian Taoist Master. What can you tell us about him?

AB: Yes, that is Duan Zhiliang. What an opportunity for me to have studied with him when he gave some workshops in Maine. He was Catholic, a Taoist, and a healer who was born into a family of martial artists who had protected the Emperor. For most of his long life (he recently passed away at 107) he served as a healer working in obscurity in clinics on the back streets of Beijing, continuing on alongside the chaos of Chinese history in the 2oth century (indeed he called his system Hundun Qigong). A true grandmaster and natural human being who said little and radiated a lot. I invite people to google him for more information.

LR: This seems like a good time to circle back to the practices. You said there is some overlap with Wisdom contemplative practices.

AB: The Taoists have a beautiful phrase, “clearing out the lodging place.” The lodging place refers to the heart and clearing it out refers to letting go of our thoughts to make us more available to the movements of Spirit. The connection to Centering Prayer is obvious. This letting go, the shedding what is unnecessary, is a key aspect of Taoist practice.

LR: Having myself worked both within Taoist circles and Gurdjieff circles, I have noticed overlap there. Have you?

AB: Ah, what a delightful find a few weeks ago. Prior to Cynthia’s first pandemic post, I had only been exposed to the Conscious Work process at Wisdom Schools. I immediately purchased Azize’s book, have been reading it extensively and incorporating a couple of the practices in my daily routine. Several of the practices, most obviously the basic rotation, are variations on what I was already doing through the Taoist stream, but with upgrades in consciousness from the slightly different take. I’ll be working with these for a good long while.

LR: Do you have an example of a complementary practice that you could leave us with?

AB: Sure. When we go to meditate or pray we orient to going inside.  It can be very worthwhile to explore the opposite: literally going outside. This can assist in the overriding goal of making inner and outer one. You can prepare by rubbing your hands together and then tracing them around the surfaces of your body, actually touching your clothing or an inch or two off the surface. This is not about moving energy but inviting your awareness to be extended just slightly all around you. Then, as you settle in, allow your awareness to be on the outside surfaces of your body and extend a few inches. As you get used to that, you can extend your awareness further outside, taking care to not strain and let the movement come from your soul, not your ego. You can also return to some inner anchor as needed. Try it, you might like it!

LR: I understand no previous movement experience is required to participate in your course, and everyone is welcome. What are you hoping for in your online class? 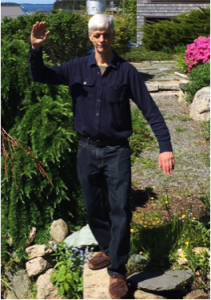 AB: To weave together the physically enlivening aspects of “tai chi” style movement with the extrovertive meditation practice, and practice in sharing experience from the immediacy of the moment. And I’m curious to see what kind of group aliveness might emerge. We’ve already experienced that it is possible to elicit quite deep senses of shared space and multileveled connectedness online, both with the teachers and students at Brookline Tai Chi and colleagues in the Wisdom community. Thus the size of the course is small to create a context for that.

Allen began studying tai chi in the early 1990’s. He currently studies with Master Tai Chi Teacher Don Miller (see his photo by the Great Wall above) and has been teaching for several years. He travelled to northern Alberta, Canada, for his first Wisdom School with Cynthia in 2012 and has been attending Wisdom Schools and studying with her since.

Learn more about his course here on the Northeast Wisdom events page.
For more information contact Allen at allen.bourque@gmail.com.
You may find his website here: http://www.contemplativemovement.info/.
Learn more here about Brookline Tai Chi.