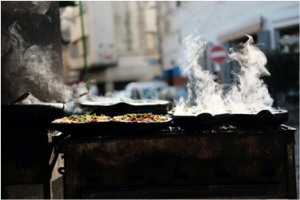 “‘How strange Africa is,’ thought the boy.

“He was sitting in a bar very much like the other bars he had seen along the narrow streets of Tangier. Some men were smoking from a gigantic pipe that they passed from one to the other. In just a few hours he had seen men walking hand in hand, women with their faces covered, and priests that climbed to the tops of towers and chanted—as everyone about him went to their knees and placed their foreheads on the ground.

“‘A practice of infidels,’ he said to himself. As a child in church, he had always looked at the image of Saint Santiago Matamoros on his white horse, his sword unsheathed, and figures such as these kneeling at his feet. The boy felt ill and terribly alone. The infidels had an evil look about them.

“Besides this, in the rush of his travels he had forgotten a detail, just one detail, which could keep him from his treasure for a long time: only Arabic was spoken in this country.”

Like most people, Santiago is skeptical of people he doesn’t know—people who are different. And like most people, Santiago has been steeped in inflammatory stories about foreign people—people who are different. Not only do Arabs have different customs and religious practices, but here, now in Tangiers, they speak a different language. Moreover, the reference to Saint Santiago Matamoros makes a not-so-subtle reference to the Moorish invasion of the Iberian Peninsula in 711. The fall of Granada in 1492 marked the end of Muslim rule in Iberia—but obviously bad blood has remained for centuries. Santiago Matamoros will forever be known in Spain as the Moor-slayer.

Let me pause over this.

We are currently living in a doubly challenging moment in history. Not only are we contending with a world-wide pandemic, a pandemic which has exposed the inequalities of health care according to race and income; but here in the United States, as the result of the murder of George Floyd in the city of Minneapolis by a police officer, these inequities and injustices have reached a tipping point.

The Wisdom community, however loosely defined, has not seen itself as a social justice movement. But for us now not to be engaged in this moment of history in some sort of constructive, if not transformative, way would be a damning irresponsibility. In fact, Wisdom may have a perspective that may prove very helpful in the necessary restorative work ahead of us as a country and as a human family.

I have long heard the criticism in Wisdom Schools: Where are all the young people and the people of color? How can we draw them here? To my mind, these are neither the most important nor most timely questions to be asking. Rather, as a part of the alchemical transformation of the heart, most all of us Wisdom practitioners must be asking ourselves and deeply considering how our own attitudes toward race are contributing to keeping us both asleep and blind. Here glibly or superficially progressive self-evaluations that put us beyond or above such issues actually serve to keep us stuck in our own white privilege, white fragility, and white blindness. 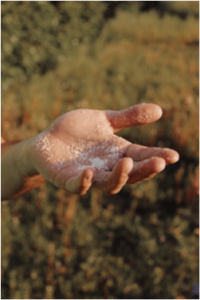 There are currently some young teachers in the Wisdom community who are poised to take us into this work. Most of us will have to confront some attitudes about race and color that we would rather not own up to. Beyond spiritual declarations, we must engage in difficult small group discussions wherein we can both inspire each other with self-honesty and hold each other more deeply accountable.

In the end, the Wisdom path may prove most helpful in all of this in its deepening capacity to see the divine wholeness in all its apparent disparate parts. While the parts can be differentiated and distinguished and thus appreciated, they belong together and can and should be joined. To see the other, not as other but as me, clumsily describes the Wisdom way of seeing. But that seeing begins by a fearless self-inventory and an acknowledgement of how biases get imbedded and stuck in our minds and our bodies. These must be mined and then owned.