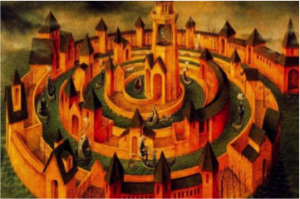 In my last post I invited us all to begin thinking more specifically in terms of the gifts and strengths contributed to the whole by the magic and mythic structures of consciousness. By now we’ve been working in Gebser long enough to see how that popular Wilber cliché, “transcend and include,” in fact merely muddies the waters. The “more primitive” structures of consciousness are not simply folded into the new structure like eggs in a cake batter. Rather, like rooms in a museum, they continue to stand in their own integrity, each with its own center of gravity and way of making connections. They are all needed to create that “paroxysm of harmonized complexity” through which the Integral light can shine.

This is true on both the micro-and macro-level. It is true in the healing of our own souls, and it is even more true in the healing of our culture. For Gebser, the individual and cultural expressions of evolutionary consciousness are joined at the hip. The outer world is not simply a gateway or metaphor for our inner journey. If anything, the flow is in the opposite direction. Conscious evolution is measured in Gebserian scale by the great movements sweeping across the face of cultural history. What we do here and now, at this crucial turning point, with the cultural institutions entrusted to our stewardship is of paramount importance to how the next chapter of the story will unfold.

So what are the great gifts of these two “earlier” structures of consciousness? As I reflect on Gebser, Jeremy Johnson, and my own seven-decade trek across this terrain (the last three years perhaps more eye-opening than all the rest put together), here is my own short list:

I believe, by the way, that the mental has great gifts as well, though not the ones we usually look to it for. The speed of processing, calculating, positing, structuring, imagining, world-building speak for themselves. But my own take, strangely, is that what the mental contributes is BACKBONE. Gurdjieff would call it “holy the denying,” second force. Evolution goes “chordate” with the emergence of the mental structure; there is something there which can and does push back. By the very force of our separated consciousness, we can hold our own against the sheer siren call of the Mystery hurtling toward us, singing us back into oneness. We have become, like Jacob wrestling with the angel, wounded but worthy opponents. And this is a painful but absolutely necessary wounding if the next structure of consciousness is to appear, because diaphaneity is impossible if it instantly incinerates the structure it is shining through.

From Gurdjieff comes another interesting insight. You can say, roughly, that the magic structure corresponds to the moving center (notice how often I use the word “kinesthetic?”), the mythic to the emotional center, and the mental to the intellectual center. And if you permit that analogy, the next step brings an even more interesting insight. Only when the three lower centers are balanced and in communication, Gurdjieff teaches, is it possible for the New Arising (a.k.a., “Conscious Man”) to emerge on this prepared foundation. The bread-and-butter work of conscious transformation in the Gurdjieffian system lies in the careful tending and strengthening of the three lower centers (paying particular care to centers that are weak or neglected in oneself) so that a balanced, prepared undercarriage is in readiness. Then and then only will the higher stage be able to emerge.

Now it seems to me that this is a very good clue as to where our attention needs to be, not only personally but even more, culturally. We need to tend, balance and consciously connect those three lower structures we have been entrusted with: the magic, mythic, and mental.

Gurdjieff often conveyed this teaching in the form of a metaphor about a horse (emotional center), carriage (moving center), driver (intellectual center) and owner (“Real I, or conscious human being.) At the present moment, he said, the carriage is disrepair, the horse’s reins have vanished, the driver is at the pub, and the owner is nowhere to be seen.

It’s not a long stretch to apply this to our own North American cultural landscape, Winter, 2021. The magic structure is missing its brakes; the mythic structure, having cut the cord with the mental, has wandered off into the poppy fields; the driver is at the pub of choice, gulping down the home brew in fiercely loyal draughts; and the Owner—the emergent Integral— is huddling in a corner, frantically texting Uber rather than risking his life to such a contraption. We can and must do better.

I ask us all: how do we begin to help restore the carriage and horse: the sturdy—albeit perhaps “antiquated” magical and mythical institutions of our culture so dismissively cast aside, even in our own lifetime, by a street-smart driver who’s sure she knows what is best? What are these structures, anyway? Where do we locate them? If the values they represent (as per my list above) are crucial to the emergence of the Integral—and even in the event that they can be gently disentangled from the cultural institutions that have borne them for so long and be revivified in other ways, by no means a foregone conclusion—how do we find the heart and the forgiveness for this work? How do we sober up from our smug dismissiveness, pick up the currying brush, and start again with the work that must be done, for the sake of the whole, for the sake of the future? 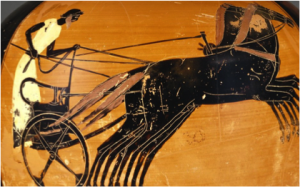 Please see Cynthia’s Afterword: Jean Gebser Lesson X here in the Wisdom Community Forum, where she is hearing resonances: “Trying to understand how to reconnect, rebalance and re-honor the severed magic, mythic, and mental structures in our culture is a gargantuan task, beyond any single one of us. But I already hear you…”

This is the eleventh posting in the Exploring Jean Gebser series by Cynthia Bourgeault. You will find the previous posts here:

An Invitation to Begin the Healing Work;
Stages Versus Structures;
Unperspectival, Perspectival, Aperspectival;
The View from The Periscope;
The Perspectival Mainspring;
The Deficient Mental Structure; and
“You Can’t Go Home Again…” The Mythic and Magic Structures;
What Integral is Not;
Integral as Theotokos: A Western Take on Origin; and
The Baton Has Been Passed: Now Can We Run With It? Exploring Jean Gebser, Lesson IX.