Grounded in the Abyss

Plant your feet firmly in the abyss.

These were the words that I heard inwardly as I awoke one morning in December 2015, during a dark and chaotic time in my life. This message was deeply perplexing to me: how can one be “planted” in the “abyss” which has no ground? But this paradox is the very essence of a wisdom message. As my struggle to understand its meaning gradually shifted to simply opening to the wisdom that emerges from a deeper level than the rational mind, I had a felt sense of being grounded even while realizing the emptiness. Although I still had no rational understanding of the paradox, I experienced a deep love and peace flowing throughout my being. I became very aware of my breathing and my heartbeat – not really “mine” at all but the gift of God – the process of life that I identify as “me” in this time and place. I was put in touch with the unboundaried nature of who I truly am: the infinite, overflowing love energy of God taking this transient human form. This is the deeper “knowing” of wisdom that grounds us while we live in the dark abyss of “not knowing” that is our earthly life. 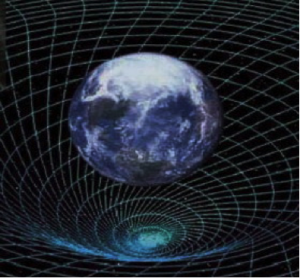 As the cycle of life continued and the light returned, this message that had guided and supported me through the dark times went underground. But almost exactly three years later, it emerged with great intensity once again. This was another period of great chaos and deep darkness in our lives, with a family tragedy and Richard’s health crises that I have written about in previous blogs. But now the emphatic message to “Plant your feet firmly in the abyss!” seemed to relate not only to our personal situation, but to the collective darkness as well. I am extremely distressed, as are so many today, by the profound suffering that we see throughout the world: increasing natural disasters due to climate change, surging numbers of refugees who are fleeing war and violence, accelerating extinctions of our fellow creatures on Earth, and the continuing greed and arrogance of human beings that causes such destruction. The specter of ecological catastrophe and nuclear holocaust appears to me as a black chasm beneath our feet that the human race is falling into. The uncertainty and anxiety that we face in the darkness of our personal lives is increasingly intertwined with our global condition.

It seems to me that the reappearance of Wisdom’s message at this time means that she is calling us, both individuals and all of humanity, to heed her words and ground ourselves in the dark abyss of human life.

Wisdom also “speaks” to us through synchronistic events in our lives, which I experienced as I held her message in my heart, receptive to her further revelation. At this time I came across Kathleen Dowling Singh’s book The Grace in Dying, which illumined another layer of meaning for me. The experience of nearing death, which is mirrored in all of the smaller “deaths” that occur throughout our lives, brings us to the edge of the abyss in which we see only darkness and emptiness. This is the stage that Singh calls “Chaos,” which is the first attempt of the ego to cope with a terminal diagnosis. The intense suffering of this overwhelming chaotic period may eventually lead to the stage of “Surrender” when the ego finally lets go of its need to control and falls into the dark abyss. As Singh says, “With the surrender comes…. the terrifying free fall… (which is) the opportunity to land finally: to retouch the Ground of Being to find footing once again, to become rooted, whole, stable, complete.” So all of the small deaths in our life – all of the losses and crises that reveal the reality of life’s chaos – are an important part of the process that leads to true and complete surrender to life, accepting “what is” in each moment without the defensive protection of hard ego boundaries. Instead, one’s security arises from being grounded in the eternal Ground of Being. This is when

“we, finally, after decades of wandering and wondering, know ourselves to be planted in Love.”

The free fall into the abyss carries us into the depths beyond the personal ego. But to be “planted in Love” is to “plant one’s feet firmly in the abyss” that is both the Void and the Source of Life. This is the final realization that Singh calls “Transcendence.” 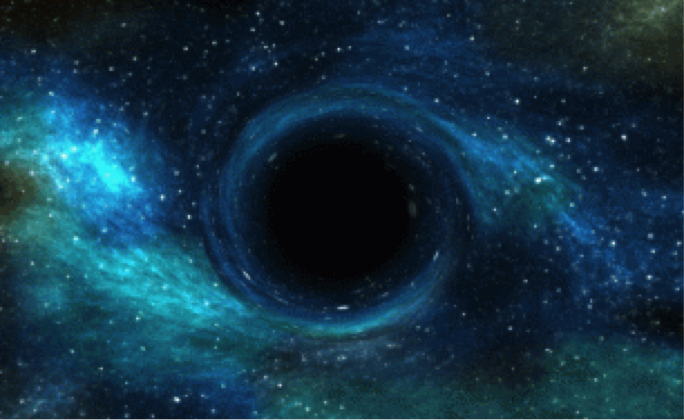 When we “plant our feet” in the infinite abyss of Ultimate Reality, we realize that though there is no firm ground to stand on in this transitory earthly existence, we are able to stand in the Transcendent Ground of Being. This is the state of Presence that Eckhart Tolle says is to be “rooted in the Unmanifest.” When we live in this state of Presence – the eternal Now – the transformative, creative energies of the dark abyss are able to flow into the world of space and time.

It seems to me as I look at the condition of our world that the same process that the individual goes through in nearing death is also taking place in the depths of the collective unconscious at this time. The tremendous pressures that rapidly accelerating, disruptive changes are putting on the human psyche have brought us to an intense experience of global chaos. Like the individual who first meets the prospect of imminent death with the defenses of denial, so most human beings are still trying to escape from the reality that the old ways of living, based on identification with the individual separate self, is no longer sustainable for earthly life. The suffering that we endure personally when we are forced to confront the dark abyss of “not knowing” and realize that there is no longer firm footing in our ordinary lives, is mirrored in the collective suffering that we see throughout the world as we face an unknown future. But it is precisely in the deepest chaos that the greatest potential lies. Perhaps we are now living in the stage of chaos that must precede the dissolution of the isolated ego, experienced on a collective level. As the suffering of the nearing death experience of the human race continues to intensify, the human psyche may be brought to the brink of the abyss where a collective surrender can take place, as we let go of our constricted egoic identities in the new “fall of humanity” into the Ground of Being. At the mythic level, the first “fall” out of primal unity into ego-consciousness will be healed by this “fall” into unitive Transcendence. 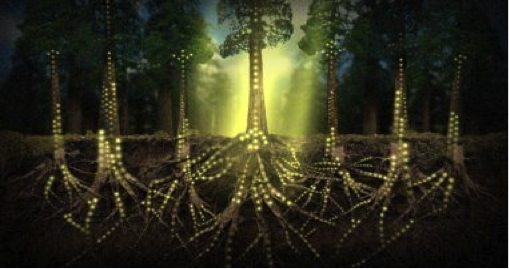 Whether or not the human race will realize this potential depends upon the spiritual work that each of us does to transcend ego-consciousness by “planting our feet firmly in the abyss.” Each person who attains this deeper view of identity affects the human psyche as a whole, aiding the collective transformation of human consciousness. As scientists have shown that the life of the forest depends upon a complex interconnected root system of individual trees, so the life of the human race depends upon its being an interconnected root system that is “planted in Love.” If enough human beings rise to this task, the Life force may transform the human race in accordance with its evolutionary potential of Transcendence, rather than succumbing to the destruction that seems to be the course that we are now on. 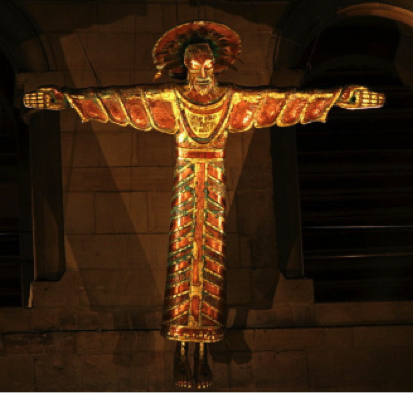 In my further reflections on Wisdom’s message the vision appeared of a golden figure of Christ on the cross, and an inner voice spoke these words:

“This is how you plant your feet firmly in the abyss.”

The Universal Christ provides a model for the “fall into the abyss” that is now the urgent spiritual task for humanity. In the deepest suffering of the crucifixion, his body lifted high on the cross and his feet hanging in the air, there was no stable earthly ground to stand upon. But in this darkness he was “planting his feet firmly in the abyss,” standing in the Transcendent Ground of Being. This abyss, the Emptiness that is the Source of all creation, is the darkness from which the light emerges. The golden light emanating from the crucified Christ reveals the deeper truth of Wisdom’s message: to be “planted in Love” is to enter the Great Flow of Being through which light and love manifest in the world. When we fully awaken as conscious human beings, rooted in the dark Ground that transcends personal identity, we will know true peace and radiate love and wisdom in the midst of sorrow and suffering. And when the human race falls into the dark abyss where its interconnected roots can be “planted in Love,” we will realize this truth of Wisdom’s message: 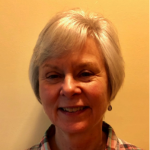 Cynthia Avens worked in the field of psychology and educational learning communities until her retirement in 2007. She then moved to the southern Appalachian mountains to follow her heart’s calling to a more contemplative life of writing and meditation. Centering prayer and Cynthia Bourgeault’s Wisdom teachings have been central to her spiritual practice for many years, and she currently leads a centering prayer group and labyrinth walks at her church in Cherry Log, GA. She and her husband, Richard Zelley, are co-authors of the book Walking the Path of ChristoSophia. This essay first appeared in their blog, christosophiablog.com.

Cynthia has been a member of the Bruno Barnhart Future of Wisdom Northeast Wisdom study group. She sent us her blog piece after the group talked about Bruno’s beautiful discussion of the reversal of the ascent that Jesus mirrors for us, the descent into the depths of matter, the earth, and our human lives.