Thoughts on Attention for 2020 and the Wisdom Trail

In December I travelled to the Claymont Society for Continuous Education—the West Virginia home of a community based on the teachings of G.I. Gurdjieff—for Cynthia's week-long retreat "Mr. Gurdjieff, Meet Mr. Teilhard!" The teachings were supplemented by daily practice of the Gurdjieff movements, conscious work around the Claymont Society's property and a solo virtuoso play written and performed by Doug Hertler entitled "Merton and Me." Not long afterwards, life came around to greet me with new perspectives on some of the core Gurdjieff Wisdom practices.

I made an ill-advised return to the ski slopes and this I learned: When it’s balance going forward or backward, uphill or downhill, the key is to pay attention to your feet. Put your attention in your feet and even in an unbalanced stage of aging (such as mine), you will be secure. Moving laterally through the horizontal dimensions, however, is—like navigating our ordinary world—more complicated though certainly in this too the feet are not to be forgotten among the other cues demanding attention.

There are numerous variations on the Gurdjieff “I AM” exercises, breathing in “I”, breathing out “AM”. Looking to store my notes from last month’s workshop, I found a version that I saw somewhere, probably Claymont, a few years ago:

“Gurdjieff forms an oval with both his hands:

‘Make contact. Not to center, but to outside, periphery.

Draw from there, draw in breath, “I.”

Settle in you, breathe out “AM.”

The Naqshbandi Sufi’s do much the same with the silent remembrance of the name of God Allah. But Al is on the outbreath, lah on the inbreath. Like many Gurdjieff practices, the sequence rubs against our mechanical breathing-mentation which would begin with the first silent syllable matched to the inbreath.

Note these two practices are dualistic exercises that are seeking Oneness, in-out, one, two. Now try a ternary sound on a two-fold breath, maybe using A-la-ha—the Aramaic, early Christian, word for God. In A—out la—in ha—out A—in la—out ha; the round has six beats. Notice how this changes your mind set. What part of you resists? For me, I experienced confusion until I abandoned the intellectual center and extended awareness into the moving and heart centers. Later, the intellectual center was able to join in sporadically to map what was happening. But even when I was confused, the practice had a feel of dynamic interabiding that I didn’t sense with the binary practices.

Both with feet and breath, the commonality is attention; and then I found a further lesson on attention from an unusual source.

The Princeton neuroscientist Michael Graziano notes that eons ago, animal nervous systems evolved the ability to enhance some signals from a neural net over others. He states that this signal boosting is one of the basic ways that neurons manipulate information and is a building block in most brain computations.

Graziano points to the eye of the crab:

“The crab has a compound eye with an array of detectors, each with a neuron inside it. If light falls on one detector, it activates the neuron inside. So far so good. But in an added pinch of complexity, each neuron is connected to its nearest neighbors, and because of those connections, the neurons compete with each other. When a neuron in one detector becomes active, it tends to suppress the activity of the neurons in the neighboring detectors…

“The mechanism in the eye of a crab is arguably the simplest and most fundamental example of attention. Our human attention is merely an elaborated version of it, made of the same building blocks” (emphasis added).

I am reminded of P.D. Ouspensky’s startling chart of many “I” s, each disconnected and responding separately to internal and external stimuli. In Ouspensky’s In Search of the Miraculous he quotes Gurdjieff, “Man has no individuality. He has no single, big I. Man is divided into a multiplicity of small ‘I’s, and each separate small ‘I’ is able to call itself by the name of the Whole” (p60) and can seize command of all of the centers.

We do exercises to learn to bring our attention under the control of the bigger I, the larger organism. It appears that crabs learned this trick four hundred million years ago! To be sure, crabs’ eyes and “I’s” are organized around the straight forward tasks of seizing food and avoiding predators, problems no longer central to our lives. For us, it’s more complex; it’s about learning to keep our attention on some of the subtler and less material inputs in the midst of survival, ego, and societal demands—and the wild firings of a complicated brain developed to deal with them all. Particularly important in the barely perceived realms are the messages experienced in the human heart. Gradually we learn to perceive these signals as subtle sensations in the body.

So for 2020, we could do worse than staying connected to our feet and the dynamism of breath in our being. With the help of our inner crab, we can make efforts to keep our attention on the murmurings of the “still small voices” and the silence from which they emerge. 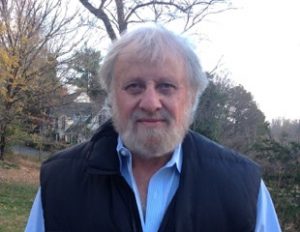