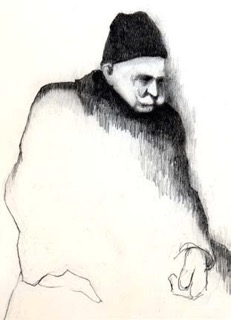 Marcella Kraybill-Greggo attended her first full Wisdom School in the fall of 2014 at the Claymont Society in West Virginia. Cynthia Bourgeault offered a week long retreat, “Gurdjieff for Christian Contemplatives: An Intensive Exploration of the Holy Trinity and the Law of Three”. As the date approached, Marcella was receiving guidance in her dreams to become more grounded physically. At Claymont, with its emphasis on the Gurdjieff movements, study would include daily experience in the moving center, as well as in the feeling and intellectual centers.

Cynthia says that an essential fruit of contemplative practice is the ever widening capacity to midwife third force. Speaking to the potential of conscious attention, she repeated a concept during the retreat which intrigued Marcella; that third force is more midwifed than taught.

The archetype of ‘midwifing’ (as being with, to bring into being or bring to birth) is central to the spiritual direction Marcella both teaches and practices. In her field, ‘midwifing’ refers to a way to both witness and stay the course while a person does their work, offering markers, reminding people of what they already know, while holding an awareness of how Spirit can work.

This meeting of spiritual direction and the Wisdom work within Marcella was deepened through Cynthia’s teaching and the Gurdjieff movements led by Deborah Rose Longo. “Midwifing third force” resonated as an invitation to explore, a call to action. “Midwifing is the sea I’ve been swimming in,” according to Marcella. For over a decade, she has been teaching Group Spiritual Direction and Counseling Group Theory and Dynamics. This call fell on prepared and fertile soil. The template of a Law of Three Midwife Group took shape, a place to begin. Congruent with the triune, three people would provide the dynamism necessary for each group.

“The Law of Three”, coined by Gurdjieff, is also known as “the Law of World Creation”. It refers to his assertion that every phenomena, each “new arising”, comes into being through the interaction of three distinct lines of action. The first is affirming or active force; the second denying or passive force; and third force is reconciling or neutralizing. How do we bring our conscious attention to these forces at work in life? How do we listen to each line of action and play with these energetic forces? How do we recognize new arisings?

Cynthia says, “Just as it takes three strands of hair to make a braid, it takes three individual lines of action to make a new arising. Until this third term enters, the two forces remain at impasse.” These three lines of action are free of moral judgment, they are each neither “good” or “bad”. She continues, “third force, or ‘reconciling’, is not a synonym for ‘grace’…it can show up as a trickster as often as it shows up as a healer. It’s simply whatever breaks up the logjam and gets things moving again.” What helps us set aside our preferences, our attachments to outcome, our judgments? Allow for the movement beyond impasse? For potent, unexpected new arising?

There is surprise and challenge inherent in working with the Law of Three in both the inner life and the outer world. Cynthia emphasizes, “in the Law of Three and the Law of Seven, the eye of the needle is the same: conscious attention. If we’re stuck in duality, negativity, urgency, identification, or self-importance, we miss the window of opportunity for third force…”

Once home from the 2014 Wisdom School, Marcella turned to two retreatants, and to two spiritual directors, with the same invitation. “I’m not sure what we will be doing, but Cynthia says the Law of Three is more ‘midwifed than taught’ and that we are often ‘third force blind’ in our own lives. She says we need others to help midwife what is truly wanting to be born. I want to learn what it means to help midwife this process in another…to aid in their ‘arising’…and, I need help in midwifing what is happening within my own life, and what is occurring within me!”

The two groups committed to work for six months and then assess. Each met once a month for two hours. This form has worked for two and a half years, and is available to all who are interested. The simple guidelines for each session include a ten-minute informal check-in followed by each person speaking for ten- fifteen minutes about something occurring in their lives. This may be a decision being discerned, an encounter of significance (positive or negative), a dream, a work scenario. Anything is ‘grist for the Law of Three mill’. Each person’s sharing is followed by a ten – fifteen period of group interaction, consisting of questions, wonderings, curiosities about what might be denying, affirming, and reconciling in the scenario shared. Always there’s a deep listening for ‘what might want to be birthed here’; how might the ‘necessary tension’ of the denying and affirming forces be brought into relationship in a ‘whole new playing field’. Each person has a turn for sharing and exploration.

One Law of Three group worked online over ooVoo (similar to skype), inquiring into how the Law of Three was manifesting in their individual lives, noticing affirming and denying at work, experimenting with how they could be reversed, curious rather than rigid. Taking up the notion ‘third force blind’, they opened to one another.

“We shared our lives and invited our Wisdom friends to listen through the lens of the Law of Three. We were able to offer each other new ideas and perspectives, evoking a seeing of potential third force that we had not been able to see reflecting individually on our own lives.” They witnessed how third force is indeed a ‘line of action’ and reconciling force is indeed midwifed. Playing with series of triads was “gorgeously helpful;” watching new arisings become part of the next evolutions. Inevitably, “each member began noticing clarity and ease, depth and inner stability, and freedom to stay present in the midst of discomfort. Held in a ‘Law of Three community’, each member gained strength, inner fortitude. A deep collective gratitude arose. While being ‘midwifed’, the ability to notice and ‘midwife third force’ in our own life also grew. Things happened quickly; clarity became more predictably accessible.” 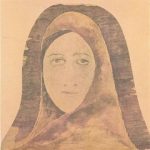 In the other Law of Three group, Marcella and two other spiritual directors (one 79, another 81) met in person. These two women, steeped in Wisdom study and practice, Marcella came to consider her ‘Wisdom Ammas’. “We met month after month, discussing our lives in the light of the Law of Three. With the Holy Trinity book in one hand and a pad and paper to draw triangles in the other, we eventually felt drawn to review our entire life story through that dynamism.”

Working reflectively, they began meeting weekly to chart significant events over a lifetime in relationship, inner work, health and jobs. “Looking at life over time, we noted how in each of our lives, the dynamism of one triad inevitably birthed the next triad. How constriction in our lives, denying force, played along with our heart’s desire, the forward movement of affirming force. We became conscious of what eventually clarified and came into being to ‘reconcile’ the tensions.” They noticed that the interplay of the three lines of action “catapulted us into new ways of being in the world, new spiritual clarities, new jobs, and new relationships.”

“These ‘new arisings’ were stunning in their beauty, but only as seen in the rear view mirror. It was a truly remarkable undertaking. To literally sit on the floor at the feet of these two deeply spiritual women, mapping out on big poster paper the triads of their lives, noticing the dynamism that unfolded over their seventy-plus years. It was miraculous and incredibly enlightening.”

“They became my teachers, the embodiment of the Law of Three. As they shared their ‘unfolding journeys into God’, they reflected on how they had to come to repeated points of surrender time after time in their lives, in order to be launched into ‘a new arising’…which was plain as day in hindsight!”

Marcella has begun a number of other groups, each finding its own dynamism. For example, Law of Three Midwife Groups became an integral part of the Wisdom Practices Circle at Moravian Seminary last year. In addition to their monthly day-long Wisdom gathering, students meet monthly in triads for two hours, with Marcella as facilitator and scribe, charting out the Law of Three triangles as the groups share.

Through this undertaking “our class is becoming adept at envisioning our lives through the lens of the Law of Three, noting how affirming and denying forces exist, beginning to track the workings of third force and, notably, beginning to recognize the ‘sensation’ of third force as it happens. The key to learning this, and what I offer my students, is how to ‘listen’ for the dynamism of the Law of Three ‘in sensation.’ Each force – denying, affirming, reconciling, and each new arising – has a distinct embodied ‘sensation’. As we get to know these lines of action ‘in sensation’, we can recognize them anywhere and with greater ease. The heft of this embodiment is created as the dynamism of the three lines of action is revealed; tuning into the physical sensation of each line of action, opens new perceptive capacities in our body, in the moving center. Students are experiencing ‘what it’s like to midwife third force’ both in our small groups as we share particulars of our lives, and in each of their own individual life spaces and relationships.”

The miracle for Marcella is, “you can’t make this stuff up.” A key she has witnessed in this group work is how, “as Maurice Nicoll teaches, life unfolds and circumstances provide exactly what we need for our next arising.” She has discovered that working with the Law of Three cultivates increased availability for readiness. To work with, rather than against, what is happening in our lives. To give footing and grounding to manifest what is waiting to be born, to have greater clarity with greater ease. 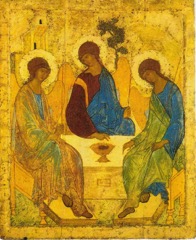 The possibilities for this work are manifold, and Marcella is willing to help groups get started, acting as a consult or reference point, joining a group of three to facilitate for a session or two if desired. Awestruck by the amount of movement happening, she recognizes that something is crystalizing differently as a result. As a member of one of Marcella’s Law of Three groups notes, “Seems to me that our third force group IS an organization at a higher level, that has the power to manifest what none of us could do individually, as Teilhard envisioned.” To become more conscious and learn to wield third force truly is an exercise that builds trust in the wisdom that nothing is ever lost.

If you are interested in creating a Law of Three Midwife Group with Marcella’s help, you may contact her through “Leave a Comment” below. More can be found about Marcella on the Seedlings page, where you may read about her Wisdom post-holding at Moravian Theological Seminary.

Marcella is leading a five day Wisdom Way of Knowing Wisdom School July 23 – 28, 2017 where she welcomes seekers into the expansive teachings from The Wisdom Way of Knowing by Cynthia Bourgeault. The retreat will include select videos of Cynthia, filmed at an Introductory Wisdom School. Through the power of technology, participants will receive Cynthia’s teaching and transmission. For more information, see the Events page.